There was a recent thread over at the Gentlemens Wargames Parlour referring to the toys of our youth, which got me to reminiscing.  Like many children of the seventies my formative years were accompanied by a fuzzy-headed, scar-faced, eagle-eyed Action Man, later he was to make way for the somewhat smaller but equally addictive characters from the Star Wars universe.  There were however other favourites that helped to prick the imagination of the young Awdry as he gambolled through these early years.  When I wasn't sticking my fingers together whilst assembling an Airfix model plane or building the latest 'carbuncle' from Lego, I was amassing great armies of plastic soldiers on the bedroom floor.  However these monochromatic warriors were to pale into insignificance when compared to those of my Grandmother and here by hangs a tale.  Whenever we visited Granny, provided that I had been a good boy, (we are groomed to accept performance related pay at such an early age!) I was allowed to have some quality time with a dusty carrier bag full of the most fabulously colourful plastic cowboys & indians, knights, wagons and even artillery pieces.  I have such fond memories of been allowed to spread them over the dining room table, rearranging figures, even swopping heads or weapons.  As with all good things it came to an end but on a relatively recent visit to the family estate I came across the same bag in the attic but sadly it had fallen prey to the ravages of time; countless causalities, many chewed beyond all recognition.  So it was that I vowed to restore the collection to its former glory and set about investigating the figures on the mighty infoweb. 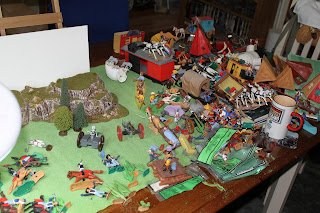 As many of you will have already realised the figures in question were made by an English company, Timpo Toys and were produced between 1960 to 1979.  Like so many hobby related subjects, a whole community of collectors appeared to exist out there in cyberspace and it wasn't long before I found myself furiously bidding on 'fleabay'.  I think it is safe to say that the collection is once again looking as it should (if I'm honest I may have overstepped the original brief - whoops!) but why mention all this here?  Well, during the recent 'Battle of the Dining Room Table', which saw my recently completed Dragoons run amok across our furniture, I was suddenly struck with the spectacular thought that this would be an ideal opportunity to dig out the old collection and photograph it.   I decided that I would only focus on one or two cherished, favourite pieces but as you can see from the photographs of the resulting scrum it very nearly caused the good Mrs. Awdry to smash the 'World's Greatest Husband' mug (just visible on the right hand side of the Photograph) over my follically challenged bonce!  Still at least I thoroughly enjoyed the afternoon that was akin to being transported back in time to Granny's house in a sleepy village in Oxfordshire all those years ago.
It is my intention, that once edited, the collection can have one more 'hurrah!' here at '28mm Victorian Warfare', after all what is the point in having a Blog if you can't be shamelessly self-indulgient once in a while? 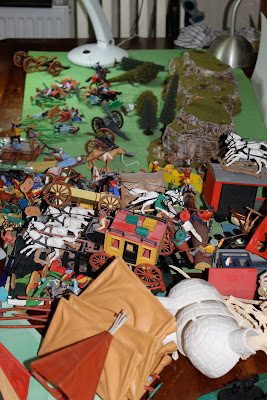 Interesting Fact: 'Bonce' was originally a Nineteenth Century term for a type of large playing marble.

Email ThisBlogThis!Share to TwitterShare to FacebookShare to Pinterest
Labels: Timpo