Part 1 - The Build
With miniatures at just over 6mm tall this project was already starting to cause concern; it's difficult to explain what  possessed me to purchase these tiny meerkats from Northstar Figures but there is no getting away from the fact that the Meerkat has stolen its way into the herat of the nation, not to mention that of the good Mrs. Awdry.  There really is  a  'Compare the Meerkat.com' website with hours of fun for those, who like me, have the attention span of a goldfish!
Still I kept justifying the purchase by saying that they would be part of a terrain piece ultimately destined for an African board.   It was to be loosely based on Meerkat Manor affording low cover for skirmishing troops and after a few hours into the obligatory trawl around the infoweb looking at the habitat of the these furry celebrities I had Initial sketches already in hand.  It was at this point that I came across a website for Snapdragon Studios, who sadly seem to no longer be trading but who had produced some amazing pieces of terrain and accessories for the wargamer.  One in particular, the 'Rocky Mound' was exactly what I was looking to achieve and consequently became the inspiration for my own build.
The build itself started life with a small off cut of plasticard (never throw anything away!) and a rough outline.  The edges were bevelled with the trusty 'Dremel' and small but useful sized piece of foamboard stuck on.  Having survived a recent route march, with the Lady Wife, along the 'Sunshine Coast' I already had the required stones and pebbles so just needed to cut them into the foam and hold in place with a dab of glue from a gluegun.  The pebbles were arranged to allow a platform for the lookout and as many liittle caves as possible to give the imprssion of an active burrow. 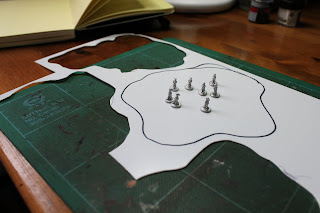 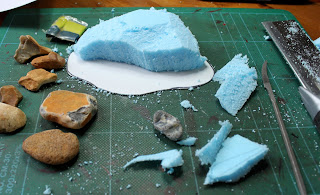 An inspired find turned out to be the remains of last year's Christmas tree that was still languishing in the garden but whose branches were wonderfully textured and perfect for the project.  With the addition of trees came the need for roots, so a little Green Stuff was added to fulfil the need and while I was at it a little more was used as another tunnel entrance. 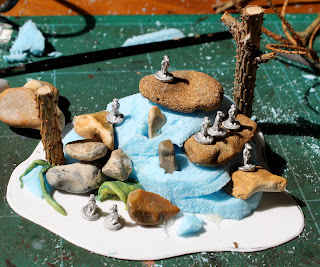 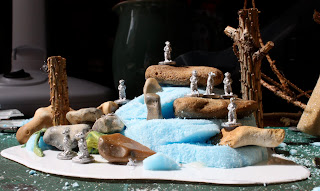 As my little meerkats came on a small moulded base I decided to have them attached to the build and paint them in situ at the next stage; a little household filler was enough to cover the cracks and their bases. All that remained was a P.V.A. and sand mix with a few addional small stones and the build was complete. 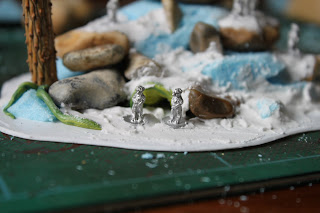 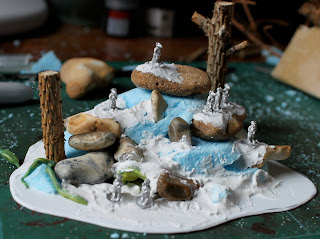 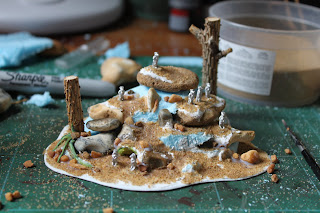