I thank you all for sticking with this somewhat self indulgent nonsense but it is rather nice seeing them up on the screen in all their glory.  Next up the boys in blue; the Timpo U.S. 7th Cavalry.  Well I say that but of course with the later issue of the chaps, some of which with their plug in kepi, they become suitable opposition for the Confederate Soldiers.  Here is one of the rare occurrences when Timpo actually used the exact same models but just changed the colours of the plastics to create a new series.
The Confederate Soldiers do not seem to have fared well, many having to find alternative headgear and all seemed to have sadly misplaced their blue neckerchiefs.

That said I was able to swell their ranks  with the sneaky addition of these wonderful Britain's Deetail figures.  This is pretty much all I had of these iconic soldiers; it was simply cheaper to by bucket loads of Airfix.  Quality will out especially when you compare the dynamic poses to that of their earlier Timpo cousins. 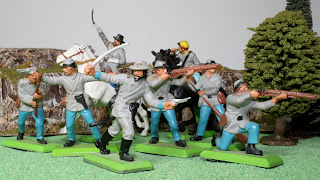