Now technically the title should of course be  'The Thin Red Streak, Tipped with a Line of Steel' but this project is far from completion.  These splendid miniatures are from 'Great War Miniatures' Crimea range and represent the characters of the 93rd Highlanders,  depicted in the painting 'The Thin Red Streak' by Robert Gibb; more of which in a later post.  They have been sitting in the paint queue for far too long as I was somewhat hesitant to proceed due to the huge amount of detail.  That said having finally taken the bull by the horns I am pleased with the results (could always be better!) particularly the badger sporrans!
Tartan will always prove to be a stumbling block but as previously mentioned I had been guided towards  a very useful tartan painting resource.  Once again I find myself painting Government issue but just t the moment I am more than happy as everything else looks much harder!

I always seem to struggle with regimental colours;  these ones are paper flags by Adolfo Ramos but I picked them up with the characters via Northstar Miniatures.  Now due to a lack of experience I started by creating a foil flag on a pole, the idea was to stick the paper flags on top with the foil hopefully giving them a more dynamic feel.  All good in theory but within minutes they simply peeled of their metallic background!  What followed next was a period of swearing, wailing and gnashing of teeth as I hacked away most of the foil and repositioned the flags but as luck would have it they seemed to hold there position.  The finials and tassels were from Victrix and helped just to finish them of nicely. 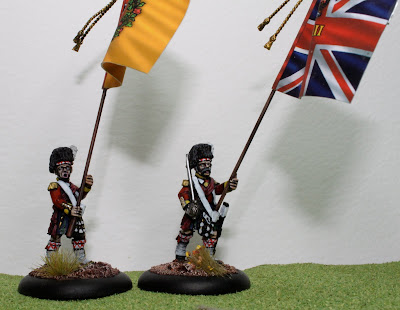