I’ve been desperate to start the new Empress, Maori range for some time having picked up a couple of sets of the mighty warriors themselves at ‘Salute 2011’ earlier this year.  A combination of my inability to remain on one task and the shear terror at trying to achieve a facial tattoo on a 28mm miniature has seen them slip further down the paint queue.  “Enough is enough!” I have now declared and it’s time to give them a go and instantly I am struck with difficult decisions! The most pressing is a workable palette for the skin tone, which at the moment is veering towards a Native American Indian.
These first three were all based Vallejo 'Red Leather', which seemed to be an encouraging base but I then added Foundry 'Oriental Flesh', highlighted with Vallejo 'Rose Brown'.  This gave a somewhat jaundiced appearance and need to be saved with a sepia wash before I was happy.  Plan 'B' saw the original base but this time a Foundry 'Flesh Shade' was added before a final highlight with Vallejo 'Brown Rose'.  In the end this is palette I'll think I'm going with just need a little tinkering with the highlight mix.

The tattoos themselves or Ta Moko, to give the process its traditional name, are absolutely fascinating.  Unlike a modern tattoo, the traditional Maori permanent marking of the body and face is different in that the skin is actually carved by uhi (chisels) instead of being punctured with needles. This apparently leaves the skin with textured grooves, rather than the smooth surface of a normal tattoo.
The process, Ta Moko is a fundamental element of the Maori culture representing commitment and respect; the practice itself is considered a tapu or sacred ritual. It is customary for men to wear Moko on their faces, buttocks, thighs and arms, whereas women usually wear a Moko on the chin and lips only.
The design of each Moko is unique to the wearer and conveys information as to their genealogy, tribal affiliations, status, and achievements.  Now clearly I’m not about to try to replicate this at such a small scale but do feel that it is important to acknowledge them in some way.
Two of the gentlemen's whose blogs I follow were a wonderful starting point and I must extend my thanks to both Arteis over at 'Dressing the Lines'  and Giles at 'Tarleton's Quarter'. Their examples have been very inspirational as too has been the wonderful online  'Tattoo Museum', definitely worth a look.  In the end I identified various repeating examples of geometric patterns and simplified them to one or two marks using blue ink as this seemed to be closest to the colours portrayed in contemporary paintings. 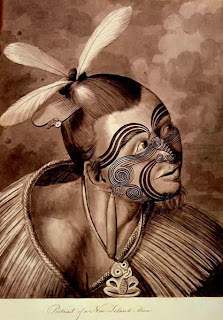 The results to date: 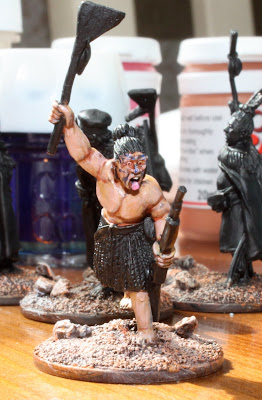 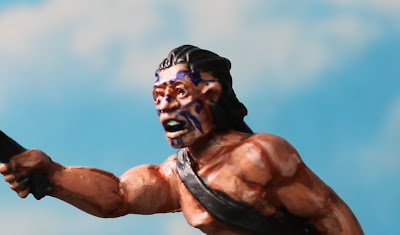 I think I've got to the stage where I feel confident enough to go on a finish the small unit that I have prepared.