The Boer War in 3D 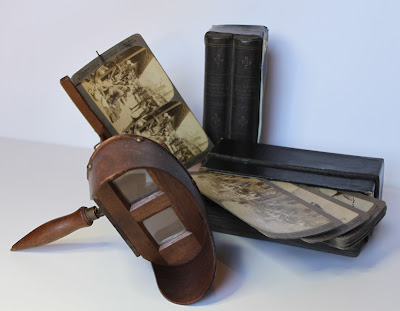 Once an animated slide is ‘clicked’ on the page it can be viewed as a still image in the normal way.  It is also probably worth mentioning, purely as a disclaimer, that every effort has been taken to faithfully reproduce the text accompanying each slide at that any inaccuracies were as they would have been presented to the general public at the time.

3. Royal Munster Fusiliers receiving the word that they are going to the front, South Africa

5. The Sad Roll Call after some of the British were cut off at Dordrecht (Dec. 30th) S.A.

7. The Yorkshires breakfasting in camp at Naauwpoort, S. Africa - their gallantry on Jan. 28th lauded by French

11. "When the Cannon's roar is still" - sleeping by their arms before Colesburg, South Africa.

12. Major Remington and his scouts - the "British Rough Riders of S. Africa."

14. The Military Camp at De Aar as it appeared before Roberts' advance to Kimberley - South Africa.

16. Telephonists and Telegraphers getting and sending News from the British Siege Train a Orange River, S. A.

19. In the Orange River Trenches holding back the Boers - South Africa.

21. Some of Methuen's Infantry firing on retreating Boers from the Boer Stronghold at Belmont, South Africa.

23. The Last Drop - a scene on the Battlefield at Dordrecht, South Africa, Dec. 30th.

30. The Burial Place, at Modder River, of the Highlanders who fell at Maagersfontein, S. Africa.

31. The Boer Prisoners (Cronje's Men) resting on the road from Paardeberg to Modder River, S. Africa.

32. Arrival of Gen. Cronje at Modder River, a prisoner of war, escorted by C. I. V. Mounted Infantry, South Africa.

36. General Christian De Wet - the Boer Leader - and his Secretary,