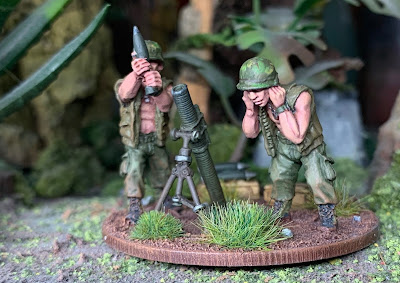 I'm not sure when it was that the day job became so demanding?  Just when I feel that I have a handle on things and start to post again then no sooner does another avalanche of pressing matters surge over the desk, smothering all in its path.  Much of my weekends are now given over to rest and repair, but having made it to the Spring half term break, I am determined to find some time for me!  In fairness to myself, I am still keeping up with my very meagre goal of one post a month, but it would be nice to capitalise on the time afforded me to push on a little more. 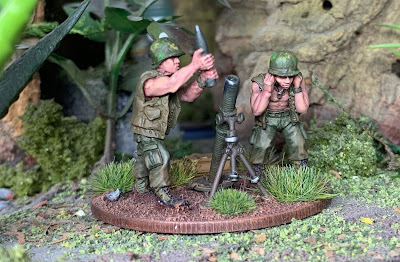 So then, another 'Nam themed post this time showcasing some splendid  'Gringo 40s' miniatures.  From the outset, I have to confess that I am a big fan of the Gringo's miniatures.  They are beautifully sculpted, yet have a heft to them that reminds me of the Redoubt Miniatures range.  They appear accurate and yet don't have so much extraneous detail of say the Empress range.  This last factor has become more important to me of late as my failing eyesight finds the larger model more forgiving when applying paint. 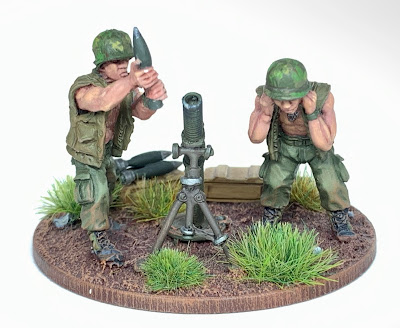 This rather splendid group is a US Marine Mortar Team in M1 Helmets and Flak Jackets firing the M1 81mm Medium Mortar.  With some lovely additional bits and pieces, I was able to base up a simple stand and enjoyed trying to get as much variety out of the seemingly limited green palette that was available to me.  As I had mentioned previously, my fledgling collection is at somewhat of a crossroads as I decide which company to favour with my pocket money.  In my naivety, I have previously claimed that I was untroubled by such trifling matters such as scale discrepancies between manufacturers, allowing me to just enjoy picking up whatever set caught my eye.  This approach could be seen to have some worth, especially when viewing the next image. 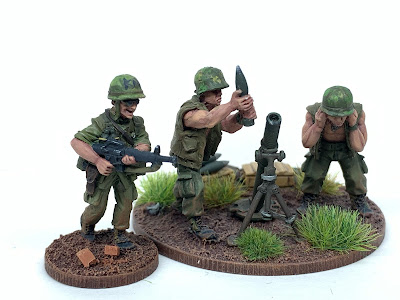 Here we have an 'Empress Miniatures' combat photographer alongside the mortar team and you might, quite rightly ask, "what scale discrepancy do you speak of sir?"  And you would be right, what with careful positioning and the fact that the mortar team are slightly hunched over, one could be forgiven for thinking that they were, in fact, cast from the same stable.  It is on on closer inspection that we start to see the details like the giant feet and bulging biceps, but even then we could pass these off as just big men firing a big gun!

"But if they are this close in scale, surely you could combine them?"  Again, looking at the comparison below* you would be absolutely right.  Although considerably taller in stature than his Empress counterpart, this N.V.A. officer might pass, unnoticed, into the rank and file of the collection.  They are mounted on the same size base and I have taken care to photograph them on the same line. 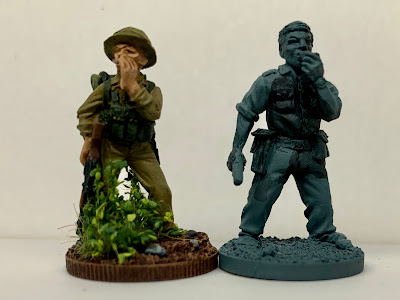 *My apologies for the dreadful photograph.

The problem comes when you see something like the discrepancy below.  Again based on identical bases and photographed toe to toe, so to speak, the result is laughable.  If I didn't know better I would say one was a 20mm miniature, but I can assure you that it isn't. 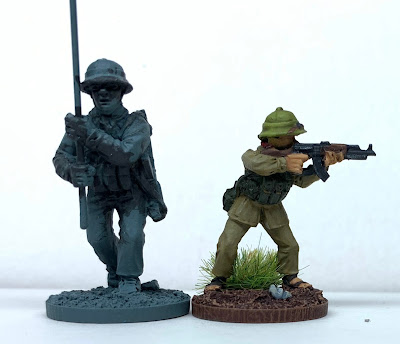 In conclusion, I am leaning towards the 'Empress Miniatures' range, simply because they are making more of the Special Forces units that my intended skirmish type games will use.  That said, looking at the 'Gringo 40s' range it may well be that I continue to add the odd pack here and there as they are just too nice to ignore completely, especially some of the diorama packs which make the table so much more interesting.

So there we have it, the last 'Nam post for the time being at least.  I continue to root around the backlog of unpublished notes, but can't guarantee any semblance of structure at the moment, just the flailing of thoughts and images as I try to keep a tangible hold on this most wholesome of hobbies.