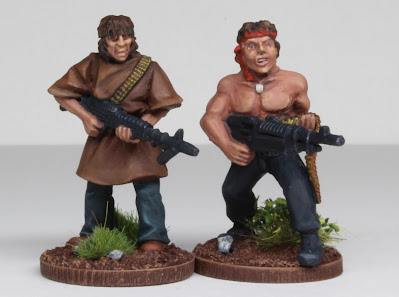 My flirtation with second the Indochina War was always going to be a lighthearted affair.  It was fuelled by the cinematic gems depicting the conflict rather than a desire to see history retold on the tabletop.  That's not to say that I intended to belittle the sacrifices made by all combatants in what was a complex and enduring campaign, the ongoing question about how soon is too soon with regards to gaming modern warfare is a debate for another time, I was simply looking for an entertaining period to explore in miniature.  With that in mind it was inevitable that a John Ramboesque miniature, or two as it happens, would be found. 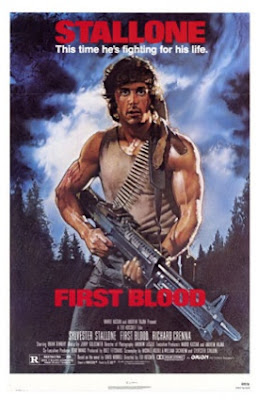 Rambo, First Blood had, initially, passed me by, I was only twelve when it received its cinematic release, but I remember Rambo, First Blood part II causing a bit of a stir amongst us pimply faced chaps at school.  Still a little too fresh faced to persuade the cinema intendant that I was old enough to witness the murderous intent of this one man army on the big screen, I had to resign myself to the book, which was a frightfully good page turner.  Now I'm not here to tell you it was a quality novel worthy of critical acclaim, but it did suffice until a well worn VHS copy of the film managed to make its way to the senior common room.

All this is a painfully obtuse way of me saying that Rambo, as a character, was a bit of a guilty pleasure of mine.  I couldn't be further removed from the muscle bound warrior of the silver screen and yet I could sit quite happily and root for him as bullets seemingly 'ping' off pectorals as he lays waste to great swathes of steaming jungle.  This butcher of bad guys whose dialogue was barely decipherable as he mutters through his lines was truly mesmerising to young Master Awdry. 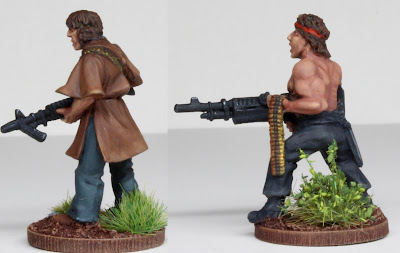 So where did I find my miniature versions of this often maligned veteran?  Well in cinematic order, John of First Blood was from 'Studio Miniatures' where as John II is from 'The Assault Group'.  Both great fun to do, although I always struggle when painting acres of flesh as in the case of the, 'The Assault Group's' bare chested Rambo.  With belts of ammunition suitably slung and brandishing the now legendary M60* general purpose machine gun, you can almost hear the brass shell cases cascading on the ground as our hero sallies forth to save the day.  Hopefully one more 'Nam themed post to come, before a complete change as I unearth some long forgotten draft posts. 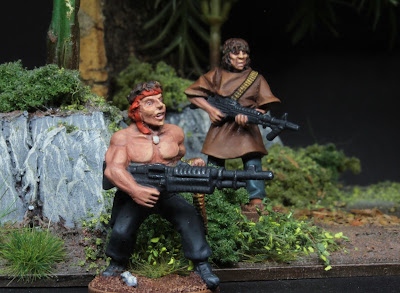 *Not to be confused with the Manchester Outer Ring Road. 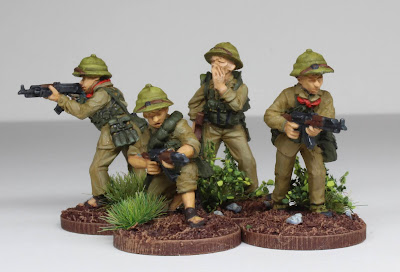 A quick win with this post insomuch as it was one of the drafts that I alluded to previously.  That said it certainly hasn't been 'quick' in the making as a cursory glance at the date stamp for this draft reveals that it was started on the 6th September 2020!  I had even penned some thoughts that I am going to include as they are a record of how I was thinking at the time...

My apologies one and all, real world issues have seen nearly all hobby time evaporate before my very eyes as we wrestle with the protocols and procedures of returning to school.  As I write this it is clear that the pandemic is going to have lasting implications on our institution, which may yet impact further.  That said, we are well and for that I am grateful.  I haven't picked up a paintbrush in two weeks, nor had the chance to write up a post or indeed catch up with the many splendid weblogs that I subscribe to.  The reality of this is that the situation is unlikely to improve any time soon and so I am faced with a dilemma.  Do I mothball, '28mm Victorian Warfare', shroud it in virtual dust sheets and wait for calmer waters or post intermittently with a reduced presence in and around our cosy corner of the blogosphere?

Clearly I decided to mothball the blog and here we are, well over a year later, showcasing these lovely sculpts from 'Empress Miniatures'.  My 'In Country' project never really got started, although rule sets were investigated and some troops assembled.  At the time there were two growing collections of miniatures available, the aforementioned 'Empress Miniatures' and some amazing sculpts from 'Gringo 40s', the big decision was which way to go?  There were definite scale discrepancies and so I purchased packs from both companies with the intention to paint them up and see if they were compatible.  I had an inkling that I was going to come down on the side of 'Empress Miniatures', simply because they were producing more of the special forces units that were probably going to feature in my skirmish level games.  That said when you see the amazing game boards of Dave Docherty Esq., he of 'One Man and his Brushes' fame it's hard to resist the Gringo's miniatures - they just look superb!  For the time being, I shall put off making any decisions, returning instead to more familiar territory as I look towards a project to get on the table for the summer holidays. 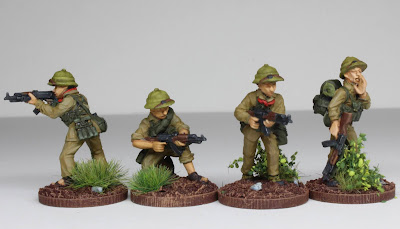 Here then, painted in a Hollywood style, were my first attempts at assembling a force for the North Vietnamese Army.
Posted by Michael Awdry at 08:30 59 comments: 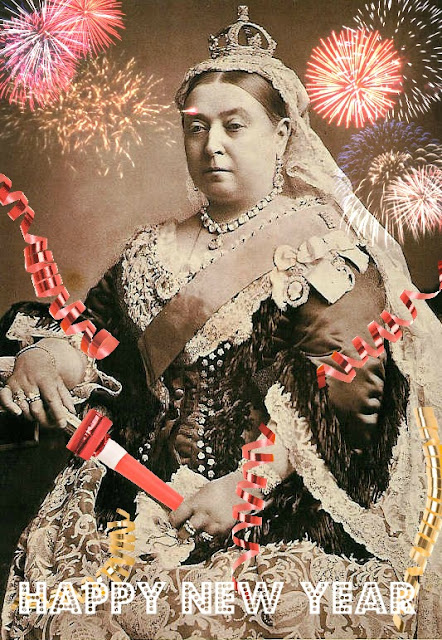 A very Happy New Year to all that pass by the pages of '28mm Victorian Warfare', here's to a fabulous 2022 and whatever it may bring you.  For yours truly, my immediate focus is to reconnect with a hobby that has brought me so much joy and fostered friendships around the world, yet has been sadly lacking in my life of late.
2021 has not been a good year for many of us, but I am determined not to let the difficulties that it presented define who I am.  That said much has changed and so it is with a degree of caution that I launch into this latest foray of the most wholesome of hobbies.  Gone is the self congratulatory review of the year, simply because there has been very little to crow about, but I do hope to show a meagre increase in production over the coming months.
Changes to my role at work and difficulties with the infrastructure have caused an unprecedented level of frustration that has seen any joy stymied.  As a result, I withdrew in upon myself, not seeming capable of producing anything noteworthy to share.  That's not to say that 2021 was a completely devoid of hobby love and as I reacquaint myself with the intricacies of Blogger I see I have 46 draft posts!  Many of these are nothing more than titles or references to ideas that I wanted to try, but nonetheless they present a tangible resource to mine in the coming months.
I am making no predictions, nor targets, just a tentative first step, back to a world of creativity that has been sadly devoid of late.  With that comes the tantalising prospect or re-connecting with a great many of you that I have become to know as friends.  Throughout my self imposed absence, I was truly buoyed by the many messages enquiring after my whereabouts, gestures that have inspired me to remove the virtual dust sheets from this tired old weblog.  Decisions as to whether one continues with Blogger can wait, for now let me, once again, wish you all a happy and prosperous start to the year.