Nothing can be more daunting than marching towards the fortified position of a battery of artillery.  The 1971 Timpo Civil War cannon evokes such childhood memories of massed ranks been decimated by matchsticks launched indiscriminately across the bedroom carpet.  Never try this with a lighted match!

A little bit of conversion work here with the torso of a fourth series cowboy used as the artilleryman, his lasso exchanged for an artillery sponge.

But wait, as the smoke begins to clear, who is this young Cavalry Officer?  Perhaps destined for greatness?  More conversion work with the bandaged head used to create a walking wounded; the joy of 'swoppets'. 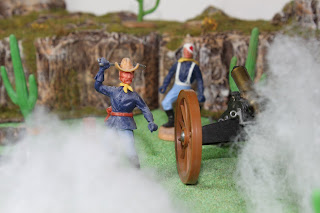 Not enough to flatten the troops with cannon, the dastardly Blues wheel out their latest super weapon, the Timpo gatling gun!  If you turn the handle at the back it actually makes a realistic battle sound; well it clicks anyway! 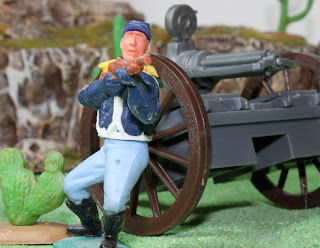