The cost of neglect

It would be fair to say that things are not going as I had hoped.  All is well, relatively speaking, although Uncle Covid has visited both myself and the 'Saintly Mrs. Awdry' for a second time.  We seem to escape his visits unscathed, but it throws our respective day jobs into turmoil as we navigate the public health advice and that of our own respective institutions.  It is the day job, good reader, that is putting paid to my hobby time.  I suspect age and failing eyesight play their part, but I just don't seem to find the quality time to indulge in a spot of painting or model making as easily as I used to. 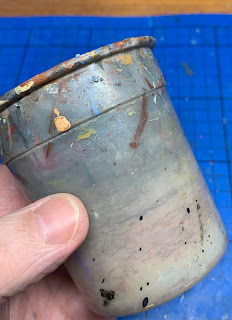 So it was that I found myself contemplating a photograph of an empty desk in a bid to make some sort of progress with my meagre task of a post a month.  As I was sitting there, gently dusting the surfaces of this forgotten refuge, I spied my latest eBay win, still securely packaged in its bubblewrap and decided to share this with you instead.

By way of context, I need to share something of a backstory with you, which goes as follows.  A cruel reminder of just how long it has been since I last painted anything, I noticed that the water in my trusty plastic water pot had completed evaporated.  As I marvelled at this phenomena, the bone dry receptacle in hand, I gave it a gentle squeeze, thinking that this might dislodge the dried film of what was once dirty water from its sides.  To my dismay there was a loud crack and the grim realisation dawned that I had done for my old friend.  We had been together since art school, this was a genuine tragedy, what was I to do? 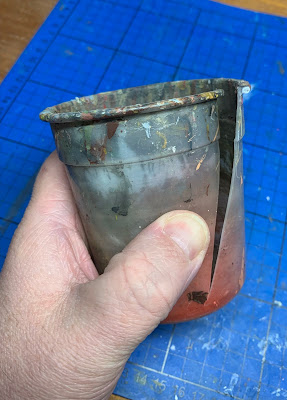 Setting aside my grief for a moment, I gazed teary eyed around the table, the pitiful sight of long abandoned projects did little to lift my moral, but then my eyes fell on my couple of Denby Stoneware pieces, a small milk jug that I use for storing my brushes and a storage pot, resplendent with guardsmen transfers that holds my smaller tools.  I wonder, thought I as I stroked my bristled chin, could there be something in this range to replace my poor lost friend? 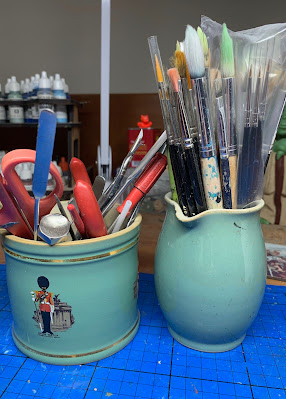 As luck would have it, with a mere couple of minutes of web based research, a likely contender in the shape of a jam pot without lid, was unearthed.*   Enthusiastically placing my bid, the minimum required, I sat back and waited.  A couple of days later I was notified that I had won and gladly paid the monies required, although it irked somewhat that the postage and packing was going to be greater than the object itself!  My long serving water pot was replaced.

*Made from the exact same clay too! 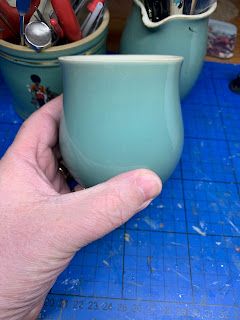 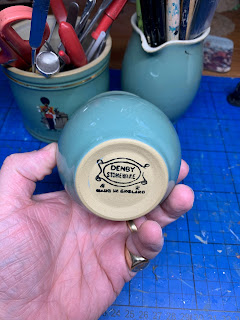 There is nothing hugely remarkable about Denby Stoneware.  These particular pieces are Denby Manor Green, which is perhaps one of the oldest ranges and one that is instantly recognisable as a classic Denby design. First issued in 1938, from a design by Donald Gilbert, the pieces were finished in a rich sage green glaze with a cream interior.  Production continued until the late 1970s and as such they have a certain charm that we now refer to as 'retro'.  For me they just feel familiar, items that despite their age just do their job, perhaps an allegory for this tired schoolmaster?  Regardless, I am determined to christen my new acquisition during the Easter holidays, although as to what gets painted is anyone's guess! 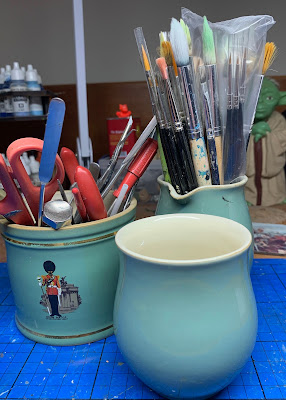