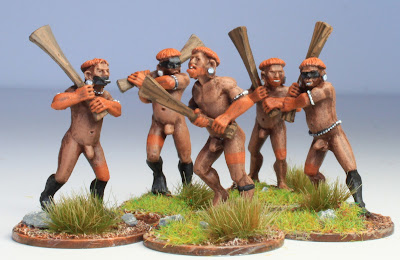 Towards the end of June, Ray Rousell's superb, 'Don't throw a 1' blog clocked up an impressive 250,000 page views - a quarter of a million hits, I kid you not!  To mark this auspicious milestone Ray decided to run a painting giveaway and low and behold yours truly was the winner!

I was suddenly faced with a predicament as to what to send to be painted up by Ray's fair hand.  What followed next was a little hard to explain, but as I glanced at the ever burgeoning lead pile I became suddenly very possessive about it.  I simply didn't want to share, they were all mine, I wanted to paint them all!

Eventually I snapped out of this somewhat churlish state of affairs and decided that the best thing to do was to send Ray something that would be out of his normal comfort zone and what could be further from that than a group of Amazonian warriors with no clothes on!  I had painted up the first group of 'Copplestone Castings' Botocudo Indian Archers when going through an 'adventure' phase earlier in the year, but had failed to finish the second pack; perfect thought I, Ray will love these. 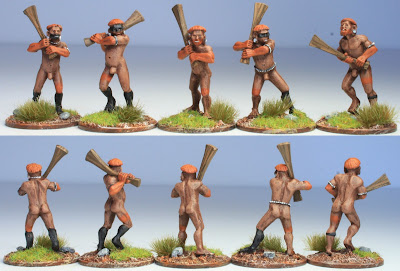 Well the 'little chaps' arrived safely back here at 'Awdry Towers' on Saturday and I've managed to get them based and photographed.  The first thing to say is what a great job Ray has done on them and once again a BIG thank you to the man.  He has managed to match the skin tone spot on with the ones that I had already done along with the body paint and hair dye.

I was perhaps a little disappointed that he didn't go with my suggestion of painting them to represent the  Franonian National Hurling Team, but in retrospect, matching them to the original miniatures was the best course of action!  Poor old Ray seems to get himself into all sorts of scrapes, the most recent been a painting duel with the delightful Anne O'Leary of 'Anne's Attic', so it is rather nice to have this opportunity just to say,

thank you and a job well done Ray! 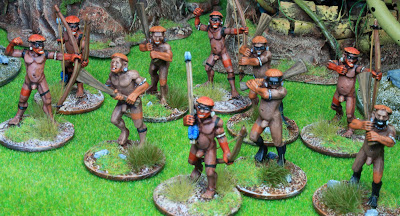 Movement tray with a combination of Ray's painting and my own efforts.