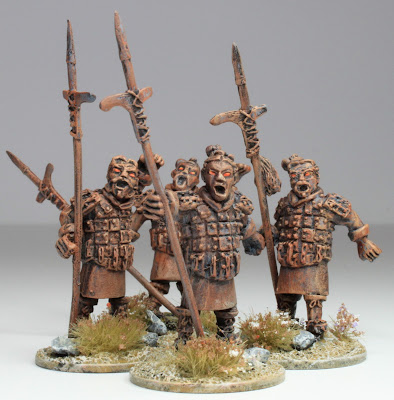 From the files of the 'secret project' come these fabulous zombies by 'John Jenkins Designs UK'.  I had originally seen these as part of an inspirational Blood Bowl team 'Terracotta Terrors' by Paul from 'the Man Cave' and around the same time my good friend, the 'Provost Marshal' sent me the link to the company; he really does excel at finding things to spend my pocket money on!  I just had to have them, but it wasn't going to be as easy as all that.  It transpires that the chaps at JJDUK no longer have a manufacturer and have subsequently run out of stock.  Because I had ordered online, before the website had been updated, they honoured the purchase by shipping in the missing parts of my order from John Jenkins' private stash in Hong Kong - now that is customer service! 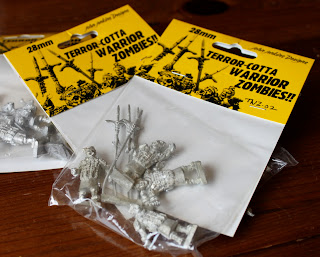 Great fun to paint, just dry brushing really and picking out a few details here and there, it is such a shame I can't get anymore of these, but onto more important matters as in how to shoehorn them into the 'secret project'!

The Qin leader, Qin Shihuang, conquered the warring states, united China and became known as The First Emperor.  In his tomb at Xian lies a terrifiying secret; one of the occult wonders of the ancient world. Over 6000 warriors were slain and preserved by a hideous ancestoral ritual, cursed to serve their master and protect him... for eternity.  (courtesy of JJDUK website)

For all eternity that is until the figures, dating from 3rd century BC, were discovered in 1874 by some local farmers in Lintong District, Xi'an, Shaanxi province.  What followed was the wholesale plunder of these ancient artefacts on an industrial scale.  A unscrupulous bunch of grave robbers set about the transportation to Europe and the New World smuggling the artefacts in with legitimate goods, normally tea or silk.  Finding their way into private collections around the world the splintered army was to remain an impotent totem of a long lost civilisation, but then the unspeakable would happen; the curse would be awoken! 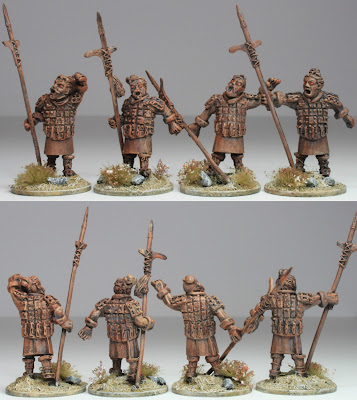