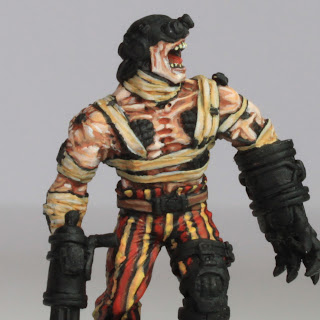 The glorious British summer deemed fit to make a brief appearance this weekend on the 'Sunshine Coast', at least long enough to finally get a undercoat on my allotted miniatures for 'A Tale of 3 Painters'.  Slowly but surely I am starting to get my head around the crazy, mixed up alternative world that is Malifaux and more importantly the characters that I have to paint.

To say I have been apprehensive about the challenge would be an understatement, especially given the exulted company that I find myself in, but in the end I have taken Mike 'The Dark Templar' Reynolds' words to heart and just paint as I would normally.

The obvious place to start seemed to be the skin on the Ryle character and I've just used my normal palette that I employ on my standard 28mm miniatures.  The usual 'Pseudo-Impressionistic' style had to be tidied up a bit on this slightly larger miniature, but we got there in the end.

One of the only restrictions was that we had to include 'Guild' red somewhere on the characters and I had been racking my brain as to how to do this.  The obvious thing to do was to paint the trousers red, but I thought that would be too dominating a colour for the rest of the miniature and in the end created the striped effect on his trousers softening the glare of the red with an ochre; well I was told to interpret the miniatures as I saw fit!

I've yet to start the 'Hunter' character, but I'm considering building this stipe motif into that miniature; a sort of terrifying, techno tabby!  Who knows where this will end up!