Parting is such sweet sorrow...

...farewell to Ryle and the Hunter. 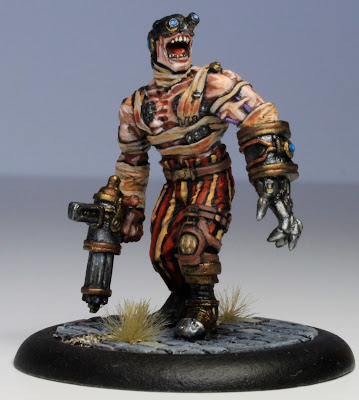 I have been fighting the urge to do Ray and Fran's '20 Questions' over the weekend in a bid to get some more work done on the challenge and so here we are, what might prove to be my last post for 'A Tale of 3 Painters' and I have to confess that I have rather mixed feelings about the whole thing.

Buoyed with the success of the metallic work on the Hunter model I approached it very much in the same manner here, using 'Tin Bitz' as a base and reaching for the 'Vallejo Matt Medium' to help with building up of the washes.  Blue has become the colour of choice for all power circuits and has remained so on Ryle's huge metallic hand and helmet.  Once again in a bid to paint something other than metal his knee support was done as a leather and canvas contraption.  Final touches included a wooden handle on the crank operated gatling gun and blood stains on the bandages (a mix of magenta ink and sepia wash). 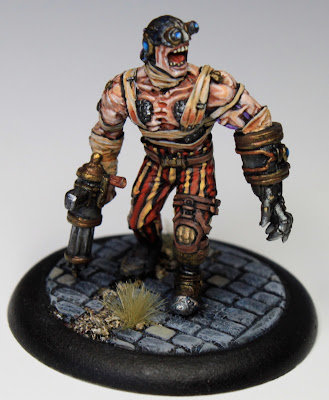 As my contribution to 'A Tale of 3 Painters' comes to an end I can honestly say that it has been a wonderful experience as well as a steep learning curve!  There have been times of self doubt  along the way, but although we have all been woking on different miniatures it has felt very much a collaboration; without the hints and tips that I picked up from both Andy and Mike I would never have been able to have completed these two to the standard that I have achieved. 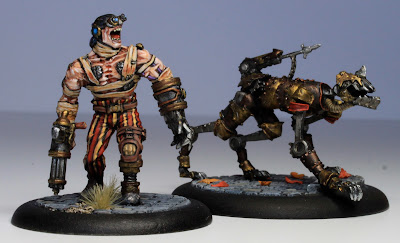 Having invested a considerable amount of time into both Ryle and the Hunter, I feel loathed to hand them back, but return them I must and I hope to have them packed and shipped by the end of the week.  What happens next is very much up to YOU.  Mike 'The Dark Templar' has been woking tirelessly behind the scenes, promoting the project but also amassing a considerable amount of goodies from some very prominent, not to mention generous, companies.  If you are interested in getting your hands on this bundle of joy, then keep following the progress of Andy and Mike, who will be releasing more details on the project as it progresses to its inevitable climax - the auction.

I would just like to thank you all for your continued support and especially those that posted such encouraging comments, it really did help to keep me going.