My apologies for the title of this entry, it was just too hard to resist!   As part of my recent foray into the Third Anglo-Burma War of 1885 I recently completed this two man Jingal team from Pontoonier Miniatures.  Try as I might I found it very difficult to find any real reference other than that a Jingal was a 19th century Indian or Chinese large weapon.  ‘Foundry’ produces a Chinese team but other than this Burmese version by Pontoonier there seems to be very little else out there.
Fortunately Ian Heath’s excellent, ‘Armies of the Nineteenth Century: Asia. 4: Burma and Indo-China’ was able to shed a little more light on the subject. 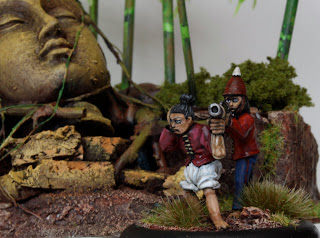 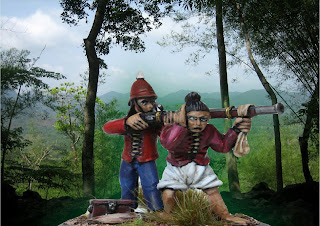 A Jingal, its British nickname, was a large calibre matchlock called pun lang chan by the Burmese.  It was, in effect, an ultra-light field piece capable of firing a single shot or, when packed with small jagged pieces of lead or iron, withering grapeshot.

I suppose that would allow me to classify this unit as artillery.

Another, more sombre reference to this weapon can be found in Kipling’s 1888 poem,

The Grave of the Hundred Head

"We called at some more places with farcical names, where the merry dance of death and trade goes on in a still and earthy atmosphere as of an overheated catacomb; all along the formless coast bordered by dangerous surf, as if Nature herself had tried to ward off intruders; in and out of rivers, streams of death in life, whose banks were rotting into mud, whose waters, thickened into slime, invaded the contorted mangroves, that seemed to writhe at us in the extremity of an impotent despair."

Kurtz: We must kill them. We must incinerate them. Pig after pig. Cow after cow. Village after village. Army after army. And they call me an assassin. What do you call it when the assassins accuse the assassin? They lie. They lie, and we have to be merciful, for those who lie. Those nabobs. I hate them. I do hate them. 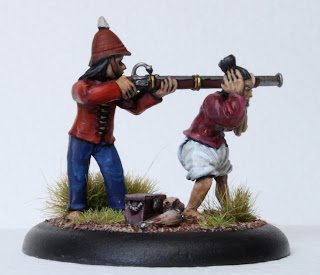 Finally I just need to extend a huge vote of thanks to Malcolm Johnston of Grimsby Wargames Society for editing some of the photos and giving them a much needed bit of drama; Thank you, Malcolm.  More examples of his work can be found on their website - grimsbywargamessociety.webs.com.
Posted by Michael Awdry at 16:37