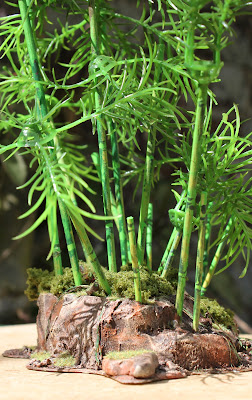 The 3rd Anglo-Burma War 1885
I seem to, once again, have got ahead of my intentions and been distracted by yet another conflict.  I was led towards a relatively small range of miniatures, from Pontoonier Miniatures sculpted by Paul Hicks intended to represent the 3rd Anglo-Burma War of 1885.   I have to admit that this was yet another conflict that I knew nothing about so I found myself totally absorbed in the research of the period.
Even before finishing my first model I just found myself wanting to create a piece of terrain and more specifically a bamboo jungle!


Pieces of foam block off cuts were stuck with PVA to a scrap piece of Plasticard.  Once the glue was dry I used the old Dremel tool to chamfer the edges of the card and worked into the foam to remove any obviously straight edges. 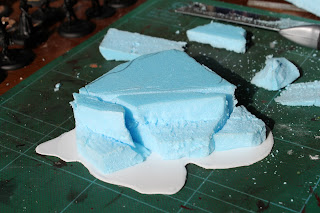 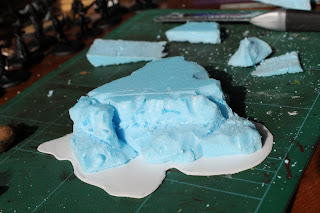 Once completely dried I used a bit of generic household filler in the gaps and helped to build up the edges a little.  A PVA with sand mix was applied the flat areas and few extra larger pebbles added for dramatic effect.  On the top surface a few pieces of dried twig to represent fallen logs and then a liberal dressing of embroidery thread for jungle creepers. 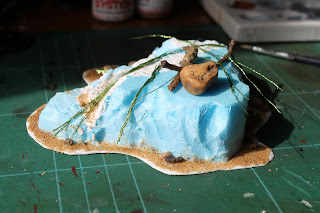 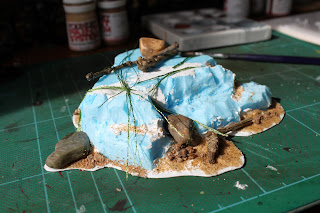 BBQ skewers and cocktail sticks were pushed in, sometimes with a little PVA, to represent the bamboo staves making sure to give a irregular feel to the copse.  These were then given a liberal spray with a grass green acrylic, the base then painted with a chocolate brown emulsion. 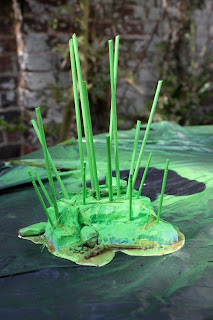 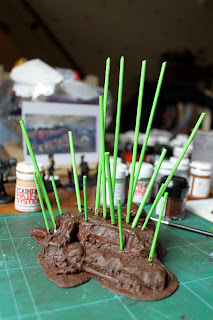 Several layers of dry brushing later and the stand is starting to take shape; bamboo painted I could then add some light green clump foliage and static grass, this I also stuck over the rocks to give a mossy feel.  The final touches came from ‘Pets at Home’ a large pet shop that the good lady wife occasionally insists we visit to look at “the cute an fluffy animals”!  The leaves for my bamboo grove started life as a plastic aquatic plant bed and although I paid £5 for it I think I still have enough for another half a dozen groves. 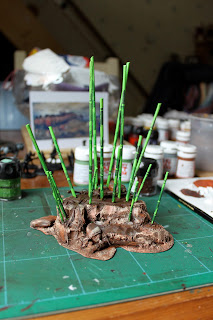 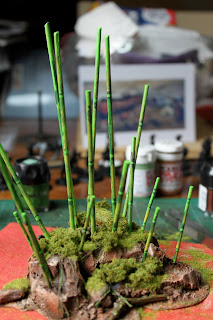 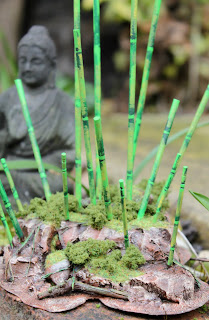 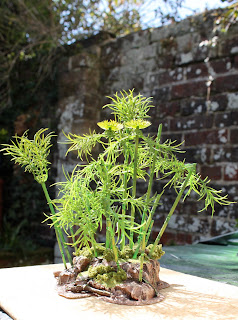 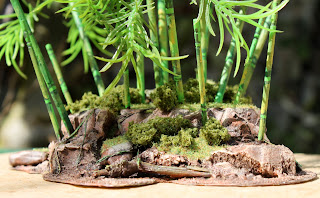 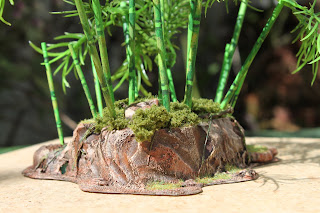 Now I just need to get on with painting the figures.
More bamboo building ideas can be found here: Bamboo grove revisited
Posted by Michael Awdry at 17:40