I'm ready for my close up, Mr. Fenton

It seems to me that from time to time our world media seizes upon a phrase and universally starts to use it as if it has always been so.  Most recently I refer to the term 'embedded' used in conjunction with news correspondents that have been attached to military units as in the current conflict in Afghanistan.  This, of course, is nothing new as I have found whilst bumbling through the history books doing background research for my 'Charge of the Light Brigade' project, two names frequently surface that of William Howard Russell and Roger Fenton.  Russell, an Irishman and the Times' best reporter accompanied the British forces to the Crimea when Britain and France declared war on Russia in 1854.  However as we now know things did not go according to plan;  the ill fated charge of the Light Brigade, poor medical provisions for the wounded, a lack of essentials including food and clothing for the troops.  All of these Russell would report upon and in most cases the Times would print his observations.  This would start to sway the public opinion of the war in Britain and this ground swell of anti war sentiment was partly responsible for Fenton's entry into the conflict.  Prince Albert realised that some form of counter propaganda was required and that by using a medium that 'never lied' surely was the answer.  Fenton was one of the founders of Royal Photographic Society but his brief for the Crimea was clear;  although he saw the half buried skeletons of members of the Light Brigade he did not unpack his camera, no dead bodies to be shown.   Fenton does however provide us with invaluable glimpses of uniforms and personalities and surely deserves the mantle of the first war photographer.
Roger Fenton travelled with his assistant Marcus Sparling using a wagon as an improvised studio and darkroom.  He would take in the region of 360 photographs documenting the 'acceptable' face of war.
In order to have my very own war photographer I've picked up this miniature from Bicorne Miniatures 'War Artists' series.  I wasn't sure, when the model arrived, that it was going to be suitable as the casting seemed to be a little unresolved in places.  However after a little web based research in order to give me a few painting ideas the resulting figure was produced.  Although very little use when it comes to game play, I'm hopeful that my little friend here will bring a little period quality to some of my future posts. 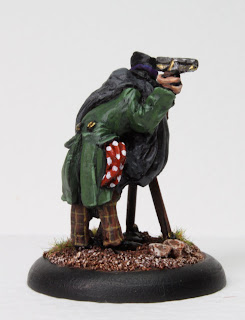 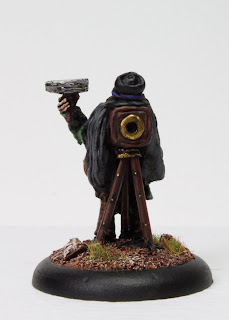 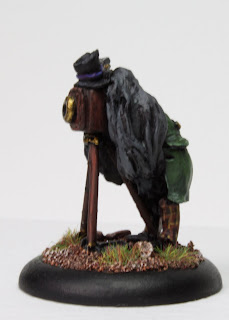