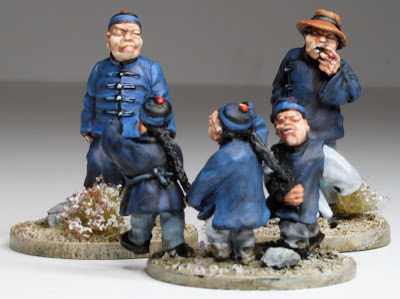 As we move into October and with the end of the year just a hop, skip and a jump away, I have one eye well and truly fixed on those self-imposed targets that were 'oh so en vogue' back in January.  I’ve been trying to readdress the shortfall in historic posts of late, but in many ways my love for this most wholesome of hobbies is still very much in its infancy and all too often I find myself darting between projects with the focus of a... oh look more shiny things to buy!

So it was that whilst painting up these rather lovely Chinese Civilians as part of the ‘secret project' it occurred to me that they could be used, albeit at a pinch, in other theatres such as the Boxer Rebellion of 1900, thus killing two birds with one stone as it were - cunning eh. 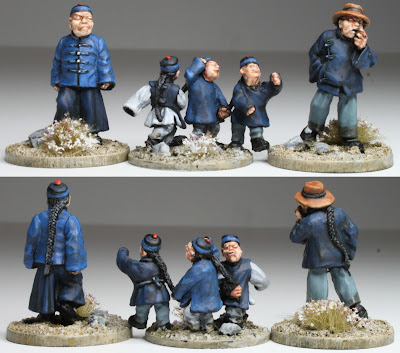 Civilians in wargames seem to spark much debate and often court controversy, but I envisaged these being used very much as 'set dressing'.  They were originally part of the 'Black Cat Bases' Chinese Tong and merchants sets.  They are rather lovely, characterful sculpts, but lack some of the definition say of the 'Empress Miniatures' range that I'm more familiar with.  Just as with the recent Boers, I wanted to create a unifying palette, in this case blue, and hope to carry it on with the second batch that are currently awaiting my attention on the painting queue; provided of course that I'm not distracted between writing this and getting back to the painting table... must just add those to basket!