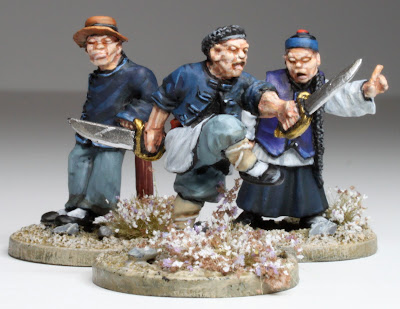 More characterful loveliness from 'Obelisk Miniatures' via 'Black Cat Bases'; once again held together with a unifying colour palette. These chaps have a much more sinister feel to them as opposed to the civilians from the earlier post and represent a more definite obstacle for our heroes. I love the chap casually leaning on his post, the barrel of his revolver just visible at the end of his jacket sleeve.  So how do they fit into the 'secret project'?

Fleeing from the social unrest, that was ultimately to lead to the Taiping Rebellion, the relatives of these fierce looking bunch or ne'er-do-wells, looked to make their fortune in the 1849-era California Gold Rush. The Chinese did not, however, only come for the gold, but also helped build the Transcontinental Railroad; not that they were thanked for their endeavours!  From the outset, they were faced with persecution from the settled population; not surprising then that they formed secret social clubs known as 'Triads' or 'Tongs',  just as they had done back home.  In the remote area of North America that is home to the 'secret project', things are a little more bearable for this most industrious of peoples.  Many of the extended family have secured work mining in the mountains above the cove, or helping lay that the final stretches of rail track that will help bring civilisation closer to this long forgotten corner of the wilderness.  Many however are seemingly employed at the local laundry, a surprising frenetic hive of activity given the begrimed nature of the other inhabitants of the town.

Although the casual observer may be fooled by the carefree playing of the children in the street, seemingly watched over by an elderly relative, they are, in fact, an elaborate early warning system for  the 'family' who have been using the laundry as a cover for the wholesale import of ancient Chinese artefacts; a lucrative trade but one that would mean certain death to those back home if ever discovered. 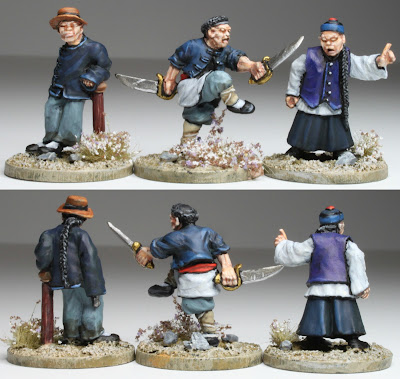 Finally the answer as to how an army of terracotta soldiers found itself taken from the 'Middle Kingdom' to the 'Land of the Free' is unearthed, but who holds the power to bring them to life...?