a Chinese Warlord and his Bodyguard. 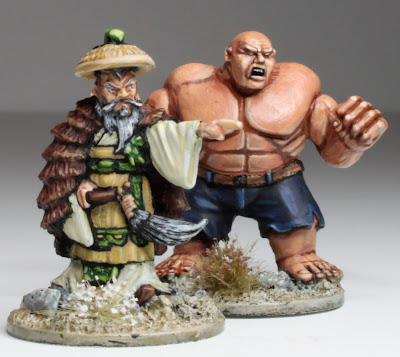 These two gentlemen are from the wonderful 'Black Hat Miniatures', the wizard from their 'Tales of the Dragon Kings' range and the human tank from the 'Mutants and Madmen' collection.  I can't claim any creativity with regards to colour palette as they are pretty much as illustrated on the company's web site, that said there are some rather lovely examples of the range over at Auton's, 'The Lead Mountain'; well worth a look.  Both are been used as characters in the 'secret project':

Din Dong, is the self proclaimed leader of the international smuggling ring that operates from the comparative, and sweetly scented, safety of the laundry.  A calligrapher by trade, Mr. Dong was famed for his incredibly long...
scroll work back home and blessed with a good education has found it easy to maintain the charade of International Crime Lord.  This has been made somewhat easier by Dim, his bodyguard, a giant of a man who can crush the skull of a man with his bare hands!   For Dong the real problems started to arise when during the routine pillage of long lost treasures he stumbled across an ancient manuscript containing a fragment of a reanimation spell...

A two for one offer!

Now in a bid to justify another purchase along historical lines, it just so happens that this miniature can also represent another Dong - it's a small world!

Dong Fuxiang was a Han Chinese General who commanded Muslim soldiers during the Boxer Rebellion of 1900. The Chinese Muslim armies of Dong Fuxiang were known as the Kansu Braves and formed the rear division, picking up the unfortunate title of the '10,000 Islamic rabble'.

They proved to be an effective and ferocious force, striking fear into the minds of the westerners who considered Dong to be an ogre.

I also need to apologise for the apparent lack of presence around the blogosphere at the moment, Im afraid the work/life balance seems a little out of kilter and with no apparent let up until the end of the month.  I am hopeful that I can get some bits and pieces painted in the coming weeks and rest assured that I am still lurking around your blogs, even if the comments fall off for a week or two. 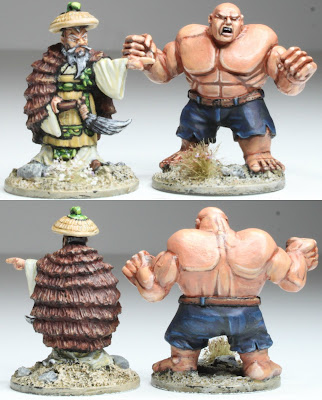