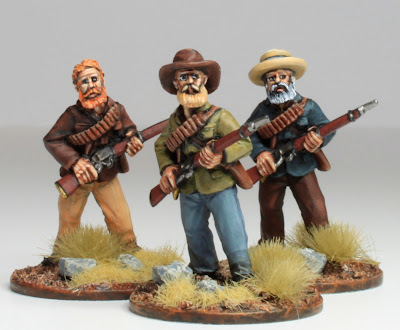 Whilst work had contrived to slow progress on all fronts I was looking forward to the start of the holidays when disaster struck!  Man-Flu, that most dangerous of contagion, had infected 'Awdry Towers'.  I have to admit it was touch and go for a while but its systemic progress was eventually halted by a tried and tested method; a glass or two of the local hostelry's finest followed by a 'Burning Hot' curry!  Now fully restored to good health (I still have a tickle of a cough, but sympathy has somewhat evaporated!) it is time to get back to hobby related fluff.


These fine fellows represent the first in a series of posts documenting my progress with 'Empress Miniatures' Boers.  As part of their Anglo-Zulu War range Empress have released, to date, three packs of unmounted Boers, each with one of four different poses.  The clever bit is that there are twelve different head sculpts so a considerable amount of variation is possible. 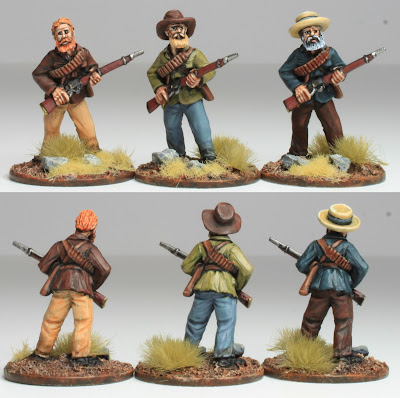 I've managed to get them all based and it is my intention to paint them by pose, trying to find a balance between individuality and cohesion.  A similar exercise, in many ways, as the previous posts on the rioters the only difference here being that I want a little more of a muted palette.

All of this done by the end of the month!  Surely not a problem, I hear you say, but then again you can't see what else is on the painting queue!  July certainly promises to be another varied month.

Yes it's true!  I was fortunate enough to have won Ray's 250,000 page view draw!  This Herculaneum achievement just goes to show how popular and respected his 'Don't throw a 1' blog is.  Should I have been a little more sympathetic in my choice of miniatures that I sent to Ray to paint up as my prize?  I think we'll let Ray tell us when they arrive in the post!  A huge 'Thank You' nonetheless Ray.

Many of you will undoubtedly already be aware that young Master Rousell is also the subject of a painting challenge!  As part of the anniversary celebrations of 'Anne's Attic' blog, Anne herself has set in motion a fiendish plan to force Ray to paint something cute and fluffy!  The whole scenario is just bonkers, but hugely entertaining, for everyone except Ray that is, so go and read all about it here.