Get Off One's Land! 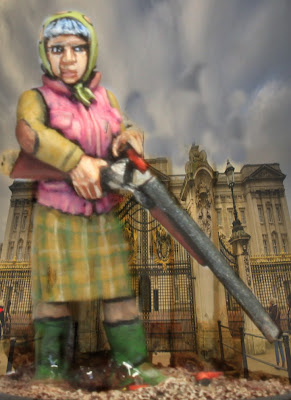 Regular visitors to '28mm Victorian Warfare' will no doubt be familiar with my curious habit of painting up miniatures that have some connection, albeit tenuous, to the most recently reviewed piece of literature to grace the bedside table.    David Moody's book, 'Autumn' looks to represent his survivors as ordinary people trapped in the waking nightmare that is the zombie apocalypse;  what better miniatures to seek out then, than just that, ordinary people?  If the truth be told, I have been desperate to find an excuse to paint these two wonderful, 'Hasslefree Miniatures' characters for quite a while now.  'Madge' and 'Frank' seem the most unlikely of post apocalyptic survivors, but that is of course part of their charm.  Given that these two have no real bearing on any current projects I seem to have spent an inordinate amount of time on them; a testament, undoubtedly, to the quality of the sculpting and the individuality of the characters.  I simply wanted to do the best job that I could on them. 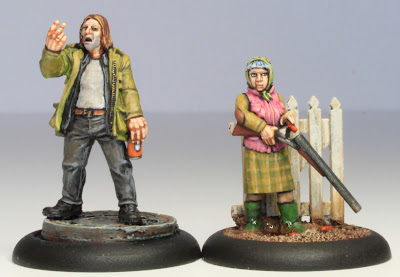 The Frank Gallagher character from the television program, 'Shameless' clearly proved to be of inspiration when deciding how to paint up 'Frank'; even to the point of matching the colour of his favourite 'Stelberg' beer!  He was given an urban style base from 'Black Cat Bases' which seemed to fit the character and wasn't really a hardship given that the pin vice was already out to affix his gesturing arm to the his body.

As for the inspiration for Madge, well let us say that a couple of corgis wouldn't look out of place!  Try as I might,  I just couldn't shake off the idea of adding some fencing to the base to give the impression that she was protecting her land from the undead hordes and before long I was shaving a little off my, still to be constructed,  'Perry Miniatures' Farm House to achieve the look.  As she is wearing wellies it seemed only appropriate that she was standing in mud and from there is wasn't a huge step to add a little Vallejo still water effect!

By this time I was having far too much fun with 'Madge' and before I knew what was happening I was fashioning spent shotgun cartridges from piano wire and adding a little reminder of the imminent danger our heroine was in; at least I can say that I've finally started my 'Mantic' plastic zombies, albeit with only one limb!

There really were a delight to work on and a welcome diversion from the Boers, which I pleased to report that I'm finally getting to grips with.

'Madge' and 'Frank' stand defiant amidst the zombie onslaught!  More on which can be found here.