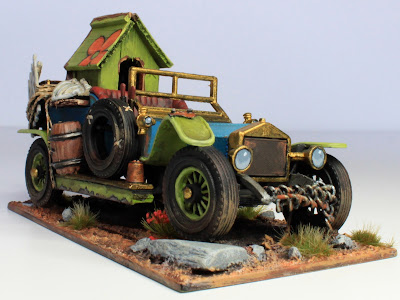 In 1906 Rolls Royce produced four chassis to be shown at the Olympia Car Show; one of which 40/50h.p. would go on to become the 'Silver Ghost' - "the best car in the world" according to AutoCar in 1907.  Unknown to all Charles Stewart Rolls, a good friend of Holmes, had been working on several secret prototypes one of which was to travel with the esteemed Consulting Detective to the United States America.


The madness that is the 'secret project' continues apace with the introduction of the 'Conundrum Carriage'.  More often than not it was the breaking down of the Mystery Machine, whilst the gang was returning from some worthy youth festival or the like, that led to 'those meddling kids' solving yet another supernatural mystery.  It seemed logical then, that Holmes, 'Shaggy' Watson and Baskerville would also need some form of transport to get them to and from their own adventures, thus the 'Conundrum Carriage' was conceived.


I wanted to convey the idea that the 'gang' had been on the road for a while, constantly having to adapt their carriage as they went along.  Given that this was at the earliest onset of automotive development it was also clear that running repairs would have to be undertaken by nonspecialists, often relying on the skills of the local blacksmith. 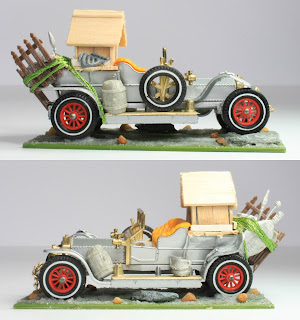 A quick scout around 'fleabay' turned up an old Matchbox model of an early Rolls Royce 'Silver Ghost' for a couple of pounds, but try as I might I couldn't dislodge images of the Clampetts' Oldsmobile truck from the Bevely Hillbillies or the Arkansas Chuggabug from the Wacky Races and soon the project descended into utter folly. 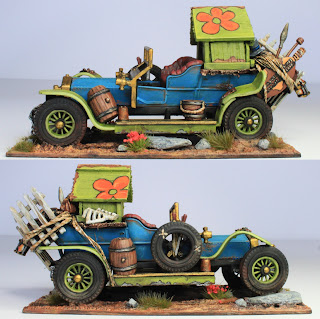 A tow chain was attached to the front along with evidence of bumped and damaged bodywork roughly repaired with plates and rivets.  The 'gang's' worldly possessions and souvenirs were now been carried snail like on the back including a hurriedly constructed kennel for Baskerville, who had started the tour as a puppy but was growing so fast that his new accommodation had to fashioned across the back seats.
A good rummage around the bits box led to all manner detritus been offered up and if it fitted it went in!  Balsa wood was used for Baskerville's kennel with a 'Renedra Plastics' picket fence, 'Empress Miniatures' Zulu shield, weapons, packs and ammo box, some 'Ainsty Castings' barrels and boxes and a rack of ribs to give Baskerville a tasty snack for the journey! 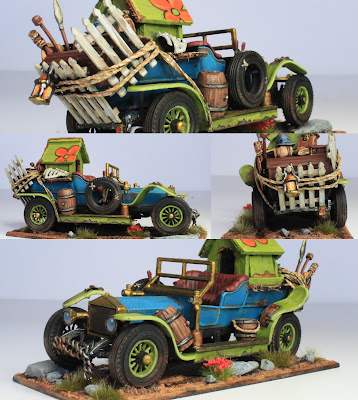 Once all was literally roped together and glued to a base it was given a generous spray with black undercoat and the fun really started!  As a homage to the original series I wanted the colours to match those of the original Mystery Machine and so the ludicrously bright paint job is now attributed to  'Shaggy' Watson's late night experiments with moonshine as a possible alternative to petrol!  The whole thing was such a wonderful diversion from everything else that was on the table that I would constantly find myself returning to it to add a few bits here and there, examples being the oil lamp, doctor's bag and top hat, all from 'Black Cat Bases', that I came across whilst looking for something completely different! 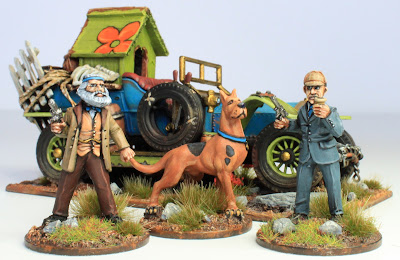 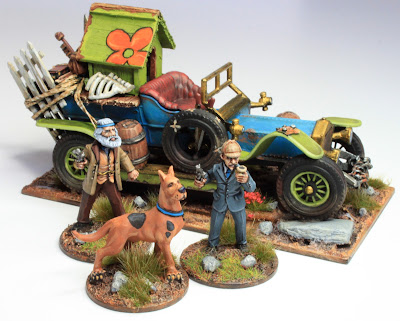 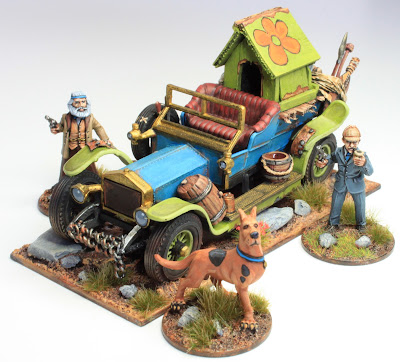 Now all I need to do is find something for the gang to investigate! 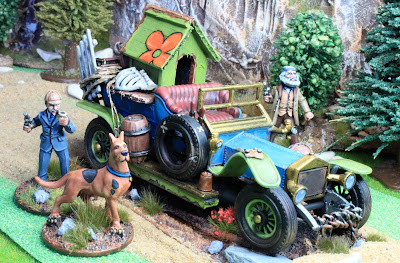