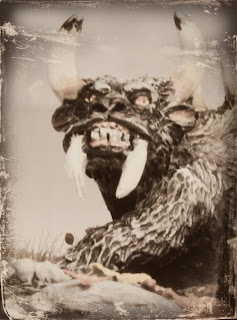 What on earth is a Hodag?  Well pour yourself a cup of tea, pull up a chair and let me tell you a story of what has been lurking in those woods.  In the autumn of 1893, Eugene Simeon Shepard made a startling discovery when he came face to face with a bizarre creature whilst out walking near his Rhinelander home.  Shepard had heard of the legend, often whispered in the lumber-camp bunkhouses of Wisconsin, but this was the first time that he had come face to face with a Hodag! 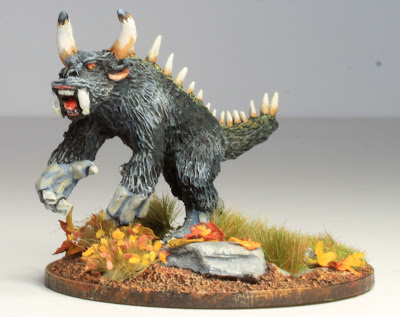 The creature was reputed to have weighed in excess of thirteen stone and been seven feet long.  It had a reptilian appearance yet was covered with short black fur and when alarmed its nostrils spouted flame and smoke, emitting a horrible odour, which Shepard described as,
“a combination of buzzard meat and skunk perfume".
Narrowly escaping with his life, Shepard gathered together a hunting party armed with,
"heavy rifles and large bore squirt guns loaded with poison water."
They came across the Hodag close to where Shepard had first sighted it; the hounds were released, but subsequently reduced to shreds by the creature!  The hunting party’s weapons proved to be just as ineffective; but the mighty Hodag had no answer to dynamite!  The charred remains were duly carried back and displayed, but three years later Shepard was handed the opportunity to capture one alive!


Now the autumn of 1896, Shepard and a group of lumberjacks surprised a Hodag in its den and asphyxiated the monster with a heavy dose of chloroform – perhaps best not to ask why a group of lumberjacks were carrying around a dose of chloroform!  (Altogether now, ‘I’m a lumberjack and I’m okay…’) In true entrepreneurial style Shepard announced that he would proudly exhibit his recently captured prize at Oneida County’s first fair; perhaps unsurprisingly the Hodag proved to be the event’s main attraction. 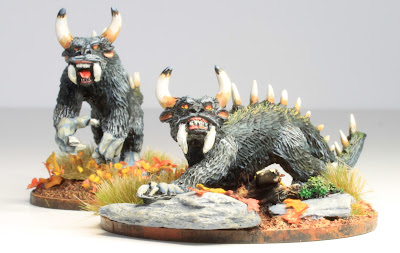 As many of you will have no doubt have already realised this Hodag was an elaborate hoax; a carved tree stump covered with an ox hide and cattle horns.  Shepard’s own sons were said to have controlled the beast by wires whilst making appropriate growling noises, safely concealed behind the exhibit.   That said it didn't stop the public flocking to the area in their thousands.

Well I’m here to tell you that Shepard’s Hodag was not the only one!  In and around an area simply referred to as the‘secret project’ there have been more and more disturbing reports of sightings of a similar looking beast.  This coupled with the mysterious disappearance of several head of cattle and the unmistakeable odour of buzzard meat and skunk perfume can mean only one thing – the Hodag has returned! 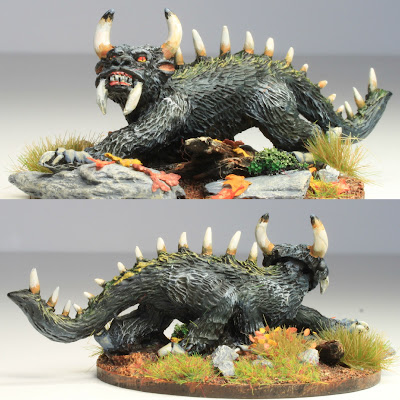 Once again these strange creatures are part of the range released by Pontoonier Miniatures via ‘Newline Designs’. Curiously labelled ‘Old West Mythic Creatures’ they form part of a fantasy Wild West range and are responsible for sowing the seeds that have led to the ‘secret project’. Just as with the Bigfoot miniatures I began with a series of dry brushed colours and then some time spent picking out the details. The basing was to prove a little problematic in so much as I had hoped to keep all the creatures on a similar size, but one of the sculpts just didn’t fit. In a brief moment of insanity I decided to file back the metal base; a task that was to prove a lot harder than I could have imagined.

They were given the now familiar ‘Autumnal’ detailing to tie them all together. Given my predilection for all things Victorian, I couldn’t help but wonder what would happen if a small town or outpost at the end of the 19th Century was susceptible to all manner of visitations from folklore, legend or popular culture. Well the ‘secret project’ is all about that very premise, not hugely original but should certainly prove to be fun! 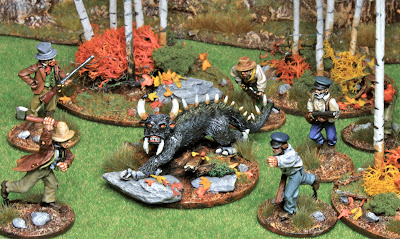 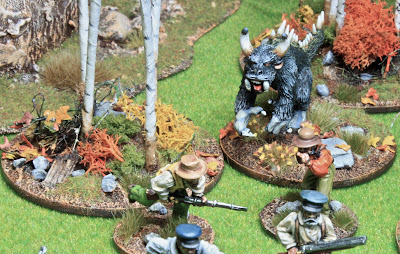 For a full account of the tale and what the Hodag means to the area please visit 'the Hodag Press' who should take credit for much of the information posted here.

On a completely unrelated note I need to draw your attention to the wonderful 'giveaway' over at Ray's brilliant, 'Don't throw a 1' blog.  To celebrate reaching a quarter of a million page views (Really 250,000 hits, I kid you not!) Ray is offering his painting services to the lucky winner of a draw; go and give it a go, what have you got to lose?