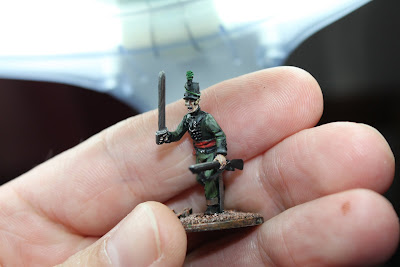 Now in keeping with my faddish habit of seeking out miniatures that in some way relate to the most recent book  that I'm reading, it was clear that I needed to find some Riflemen of the legendary 95th.  In turn, because it was the recent purchase of the 'Sharpe'  DVD box set that had led me to Mark Urban's riveting read, it only seemed fitting that perhaps I could see if I could  track down an actual Sharpe miniature. (Die hard Napoleonic fans belay those groans!)  With the power of the infoweb at my fingers it wasn't long before I came across 'Alban Miniatures' a company based in Hertfordshire specialising in 28mm Napoleonic figures.  The company's website displayed the proud boast that they were "Supplying superb quality, historically accurate, proportionally scaled cast metal" figures and I noticed that they had a character group entitled 'Harpe & Sharper', clearly a euphemism for the aforementioned hero of the Bernard Cromwell novels.  I say euphemism but of course it way well be purely coincidence that the officer is carrying a mighty big sword and the sergeant is armed with a seven barrelled Nock gun! Curiosity well and truly peaked I ordered up a pack (and several other packs if the truth be known, more of which later) and before long they were safely landed on the doormat of 'Awdry Towers' .
On arrival I could see exactly what they mean by "proportionally scaled", the figures being somewhat more slender than I'm used to.  This is not a criticism as the overall impression was one of elegance and they were indeed well cast and beautifully sculpted by the clearly talented Mr. Richard Ansell; that said I was obviously going to need a smaller brush! 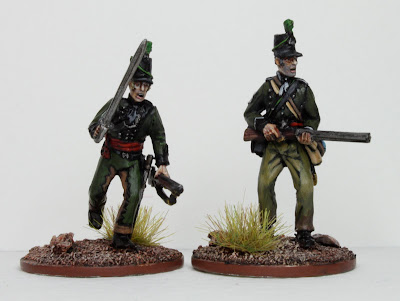 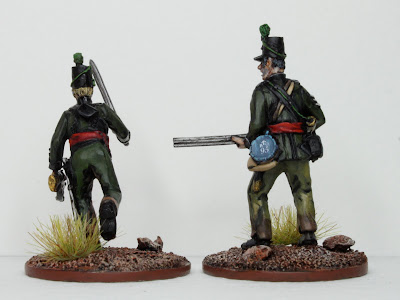 I have to admit that they were a delight to work with, there been plenty of detail to pick out, but I did take a few liberties with colour palettes opting for the age old catch all, 'campaign style'.  I would certainly recommend the company and figures to anyone, their communication and service been f the highest order, the dilemma, of course, is do I stick with my Victorian era or through everything in and start a Napoleonic collection? 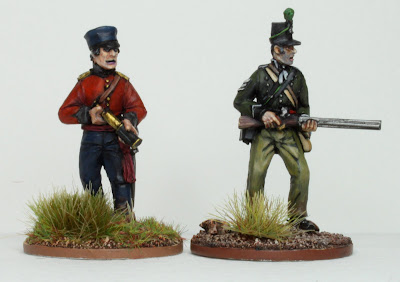 A quick comparison shot showing an Empress Miniatures British Officer from their New Zealand Wars range and an Alban Miniatures 'Sharper'.   When looking at height and body there is very little in it but when you come to the faces the evidence of the"proportionally scaled" figures becomes most evident.