Having just finished the second half of my Chinese Tigermen, I thought I would just show how the effect was created.  I used a combination of different makes of paints but key palette was "Foundry's" triumvirate of ochre.  I've recently taken to painting the bases of the model first, not sure why perhaps because having finished a figure I wanted to move on and not hang around basing them,  either way once based and face and hands complete the shade was put down where desired. 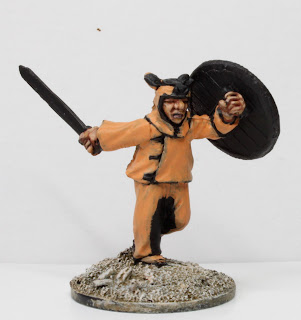 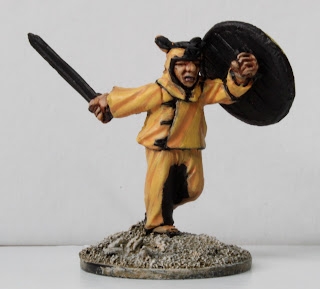 As you might expect this process was repeated, working through the various shades until the highlight stage which just picks out the top of the creases and folds.  A light beige or oatmeal colour, in this case Vallejo 'Iraqi Sand' was used for the edge of the hood inside legs and straps. 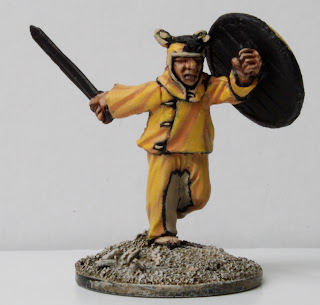 The weapons and shield were then done so the only thing left to do were the stipes. 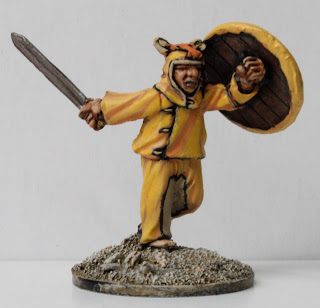 After several abortive attempts it became clear that needed a free flowing paint with a strong pigment to create the effect that I was after.  The problem was that every time I watered down the paint it just didn't look strong enough.  In a fit of desperation I used black ink, carefully drawing the brush across the figure, every so often creating a double line like a branch on a tree.  Provided you take your time this is surprisingly straightforward just don't overload the brush or the air will turn blue!  Once happy with the pattern I painted in a few light lines using a little more 'Iraqi Sand'.  What you will notice is that the ink has a shine to it so the next stage is to apply a gloss varnish. 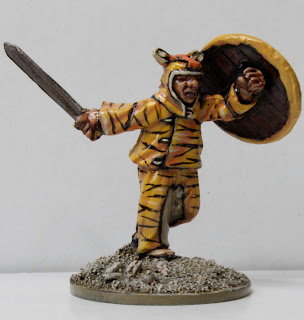 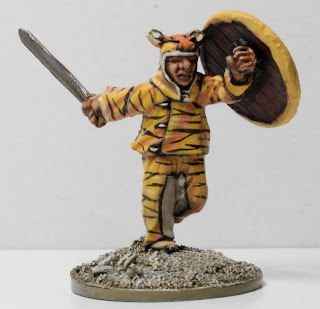 Once dry apply a coat of matt varnish this has the effect of subduing the ink stripes and blending them  perfectly; so there you have it, tiger stripes
Posted by Michael Awdry at 20:27