It's been a busy start to the month as the demands of the 'day job', not unexpectedly, dominiate my time.   That said I have managed to finish off this rather wonderful little character piece from Alban Miniatures.  For fans of the 'Sharpe' series the name of Sergeant Obadiah Hakeswill  will instantly bring to mind images of the 'ticking' portrayal of evil, personified perfectly by the late  Pete Postlethwaite. 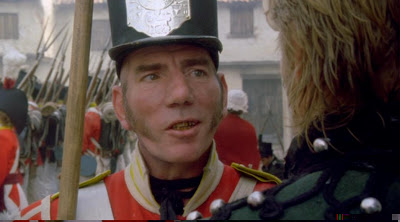 The villainous Hakeswill, having risen to the rank of Sergeant, sadistically brutalises soldiers under his command relieving them of money or personal belongings.  Postlethwaite wonderfully brings to life the deprived antagonist in two of the 'Sharpe' stories  before ultimately falling foul of a firing squad from which there was no escape. 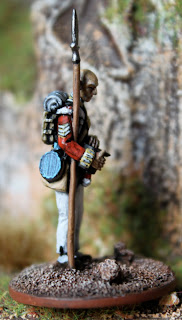 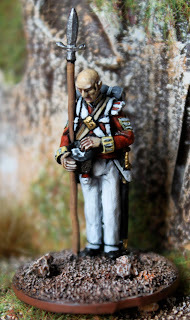 The 'Alban' figure continues to display the high standards of casting and sculpting that I have come to expect from this company and the pose reflects the character's obsession with his deceased mother, talking to her picture that he keeps under his shako whilst cradling his Sergent's pike or spontoon described by Sharpe as "battalion company frippery".  Great fun to do and a wonderful addition to the collection; my resolve is weakening with regards to the Napoleonic era!
"You lay a finger on any of my men, Sergeant, and I'll bloody kill you."
Richard Sharpe
Posted by Michael Awdry at 12:19