Perhaps to be considered as one of Victoria's forgotten wars the third Anglo-Burma War of 1885 had certainly passed me by, that was until I read a posting on the Gentlemans Wargames Parlour eluding to such a conflict.  The Kingdom of Burma, as it was in the 19th Century, sat on India's Eastern boarder so became of significant tactical importance not only as a direct threat to the 'Jewel in the Crown' but also as a possible route to the untold wealth of China.
The previous two wars had seen the Britain simply annex Lower Burma, which included the area around the Irrawaddy Delta including Rangoon.  However when King Thibaw ascended the throne of Ava in 1878 relations, once more, began to deteriorate.  His trade agreements with rival European powers, particularly France, sent alarm bells ringing in London and Britain simply moved to annex the remaining  kingdom.  The resultant campaign, described as,

not a war at all - merely a street row

met with early success with the British occupying Mandalay and forcing Thibaw into exile.  The Burmese army, however simply took to the jungles and waged a war of attrition into the 1890s.
Pontoonier's range seemed to cover Burmese regulars, British and Gurkha troops sculpted by the talented Mr. Hicks, I simply had to have some and ordered up a sample of the home team. 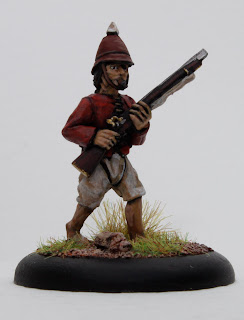 It would appear that Burmese soldiers routinely smoked in the ranks 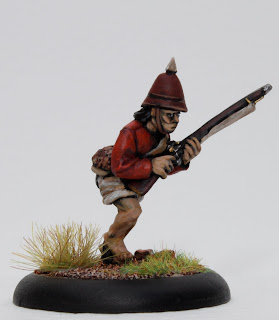 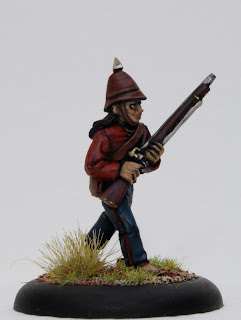 The well made bamboo helmet, lacquered red with a white spike on top constituted a much needed constant in the Burmese regular uniform. 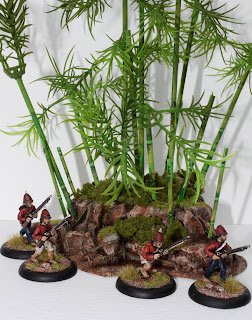 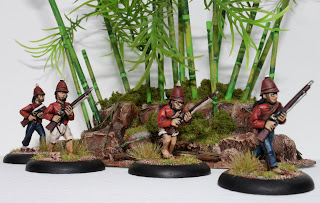