My love affair with the Empresses continues!  It is very clear at this stage that I am taking a lot of enjoyment from the painting and researching side of the hobby.  To that end the discovery of Empress Miniatures was clearly fated.  The quality of their  sculpts and the individual characteristics they cram into each figure gives me every opportunity to improve my skills.
This bespectacled officer in the patrol jacket provided me with a problem in so much as how to paint glasses? As you can see I ended up going for a bright blue that I hoped would be reminiscent of the African skies in January.  Just as an aside I am led to believe that the last two officers killed at Isandlwana were both wearing glasses.

A grizzled old infantry sergeant using a wide brimmed hat to shield from sun.  Painted as 1/13th Light Infantry (later the Somerset Light Infantry) with blue facings and cuffs.  The regiment was not present at Isandlwana or Rorke's Drift but fought with distinction at the Battle of Khambula and engaged in the final defeat of King Cetshwayo's warriors at the Battle of Ulundi on the 4th July 1879.  Light Infantry sergeants wear stripes on both arms.
The Empress Miniatures 1st Anniversary figure depicting a moment of Victorian valour 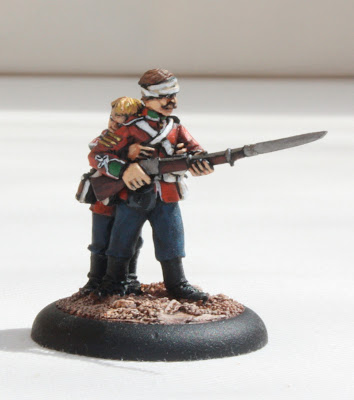 
The much maligned Brevet Colonel Anthony Durnford, closer in appearance to his Empress sculpting than Burt Lancaster who portrays him in the 1979 film 'Zulu Dawn'.
﻿
﻿