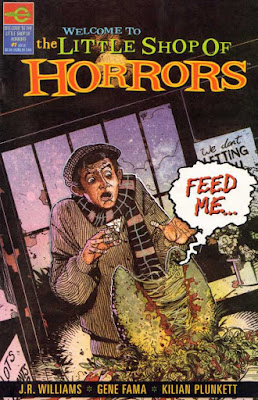 Forgotten Heroes, the brainchild of Messrs. Webb and Winstanley, is an opportunity to indulge in a spot of converting/scratch building to plug those unsightly gaps in your Superhero or Super Villain collection.  Now I had initially thought that I might give this themed month a miss this year.  The encyclopaedic knowledge of my fellow contributors, when it came to the comic universe, was truly staggering and I have to say that I felt a little out of my depth.  Although I enjoyed conceiving and putting together ‘Bouncing Boy’, I wasn’t sure to what purpose I would then employ his services? 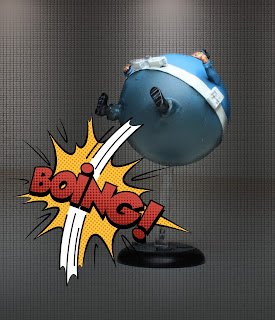 However regular readers of this humble weblog will have no doubt realised that I am fickle sort of chap when it comes to sticking by a decision and it was during a particularly distracting bout of web based research that I stumbled across a kernel of an idea that was to take root and sprout into my planned entry for this month’s event.  Yes, I was back in the running and this time with an idea that could, possibly, actually be used in a gaming scenario!  Bizarre as it may seem, I had been consumed with the notion that what I needed in my collection was a mean, green, carnivorous plant from outer space – I give you ‘Audrey II’.

A quick check of the rules was required to see if I could shoehorn my idea into the format:
1. The character you create must not yet have had an official or unofficial miniature made for it.
A cursory search didn’t unearth anything too damning; there were certainly carnivorous plants out there, but nothing obviously 'Audrey II’.
2. The figure must be in 28mm scale.
That would be fine, admittedly the plant grows throughout the story, but I should be able to stick to this one.
3. The figure must be completed during the month of June.
In the interest of total transparency I need to confess that ‘Audrey II’ was started before June, but only to see if I could actually achieve what I had envisaged.  The plan is most definitely to finish her during the month of June.
4. In your first post, you should provide a bit of detail on the character you’ve chosen and why.
Considered yourself invited to the following longwinded introduction! 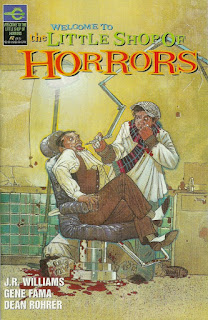 To many ‘Little Shop of Horrors’ is a rather brash, musical from 1986 staring Rick Moranis as the hapless flower shop assistant Seymour Krelborn who discovers the blood drinking plant after a meteor storm.  Perhaps what is less well known is that there was another celluloid version that gave a budding young actor, by the name of Jack Nicholson, one of his earliest rolls.  It was this film, released in 1960, that would form the basis for the comic book series ‘Welcome to the Little Shop of Horrors’.  The comic book, serialised into three episodes, is beautifully explored in a wonderful article by Matthew Hurwitz for 'Cinemachine', certainly well worth a read. 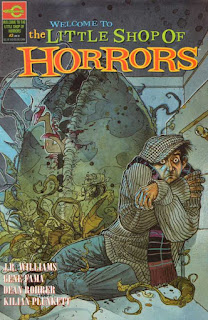 The 'detail', then, is straightforward, but the 'why?' is a little more problematical.  The idea of carnivorous plants have always fascinated young Master Awdry and more recently, I have been toying with several ideas as to how to use them in a gaming capacity, undeniably inspired by Simon Moore's 'Seeds of Doom' project.*  These have included a Wyndhamesque Triffid game using a zombie ruleset, or creating a greenhouse for Poison Ivy, filled with all sorts of mysterious plants, that could be employed in a Batman Miniatures Game.  There is also the idea of fearsome ferns in a Pulp Jungle adventure or even a bloodthirsty bloom forgotten in the depths of some haunted house - so many ideas, so little time!  So having been made into two films, a couple of comic book serialisations and a Broadway Musical ‘Little Shop of Horrors’ certainly seemed fair game.  Now it was my turn, could I take this vile, ‘Super Villain’, intent on taking over the planet, one drop of blood at a time, and recreate it as a unique 28mm miniature?  That, good reader, is what we are about to find out.

*Yes Simon we are still waiting for that battle report!