A handful of nuts. 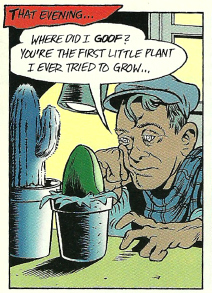 Narrator: On the twenty-third day of the month of September, in an early year of a decade not too long before our own, the human race suddenly encountered a deadly threat to its very existence. And this terrifying enemy surfaced, as such enemies often do, in the seemingly most innocent and unlikely of places... 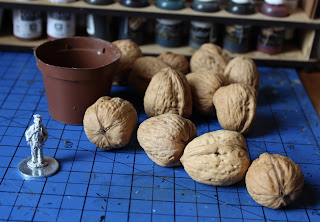 Every project has to start somewhere, that little kernel of an idea, the seed or nut from which all things grow.  In my case it was, very literally, a nut, the humble walnut to be precise.  Before I go any further I need to acknowledge the work of someone I know only as Ssendam.  It was Ssendam's work that I stumbled across on the ‘Lead Adventure Forum’ and without that inspiration ‘Audrey II’ would not have been conceived.  Ssendam had used a walnut to form the head of his carnivorous plant and this, simple yet wonderfully effective idea, was what convinced me that I could actually achieve my goals – thank you Ssendam. 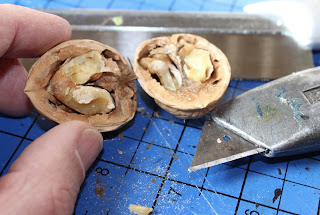 With nuts in hand*, I got off to a truly nightmarish start, worried as I was about losing fingers whist battling to get inside the iron hard nut.  Finally in, and with the interior now cleaned out, I pondered my next move.  I had become fixated on a small plastic flowerpot that I had found and wanted to make it work but reluctantly had to accept that it was just too big.  In the end I cut it down to a more acceptable height, rebuilding the lip with built up strips of cartridge paper.
*Not a phrase that should be repeated out load I have subsequently discovered. 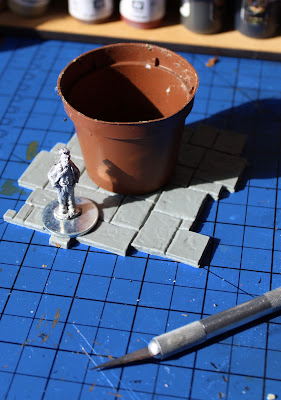 Although not the tiled floor of the flower shop, as seen in the film, the resin flagstones proved a useful base to fix the flowerpot to and so it was time to get cracking with the Milliput, something that I haven’t used before.  After a couple of false starts I started to tame the substance and the roots started to take shape.  Trying to give a sense of the plant’s ability to move, I had some breaking through the pot whilst others were crawling over the lip. 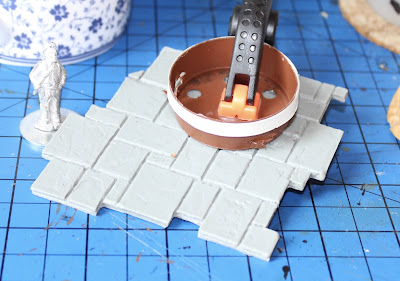 At this point my thoughts turned to leaves and tendrils.  Some paper covered florist’s wire might work for the tendrils with drops of super glue gel to give the effect of the petioles.  These had the added benefit of being flexible and could be bent to different positions. 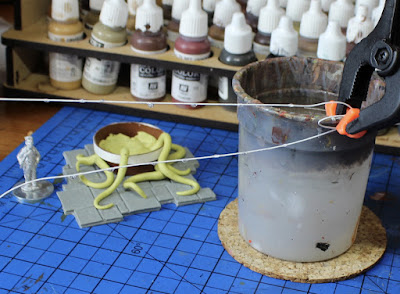 A good rummage through a bag of discarded silk flowers and leaves** turned up a few likely suspects, but they needed some new stems.  Again reaching for the florist’s wire I needed to make these more secure with the glue gun, which had the added effect of disguising the bare wire – so far so good.
**Never throw anything away! 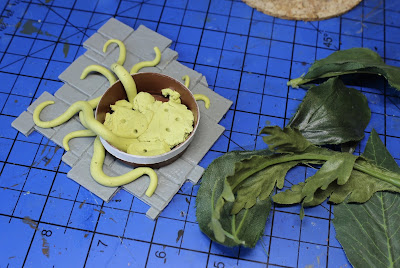 I started to think about fashioning the stem holding the head to the body by using some electrical cable, the flexibility of the material in turn leading to the possibility of a swivelling head.  In order for this to happen magnets were going to have to be employed!  A 5mm magnet was superglued to the top of the electrical cable.  This was then sited in the flower pot with more Milliput added.  Whilst necessary for the structural integrity of the piece it did rather take away the plant like quality I had previously achieved so out came the green stuff and thin tendril like shapes were rolled out and draped down the neck, hopefully restoring the illusion. 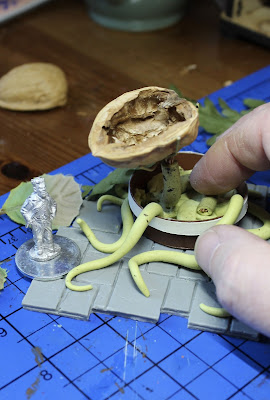 Finally soil, in the form of pumice gel, was added to the top of the pot and a little more around the roots where they had smashed through the terracotta retainer along with a few shards of plastic to represent the broken pot itself.  The final throes of the base build saw the leaves and wire tendrils pushed into the still soft Milliput and that, as they say, was that! 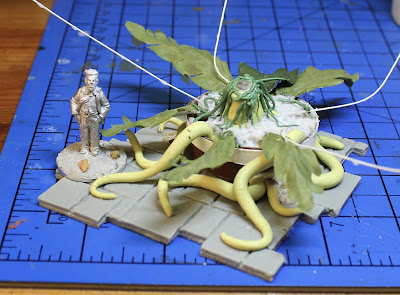