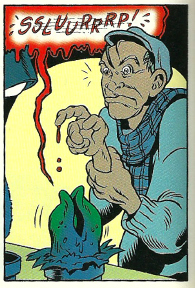 Audrey II: Feed me!
With the base constructed it was time to think about completing the head, no small matter given the characterful nature of Audrey II.  If truth be told I was quite worried about this stage as although ideas and images had been sketched out, I still had no way of knowing if it would come together, more importantly would the magnet hold the weight?

Seymour: Does it have to be human?

The first job was to fix said magnet to Audrey II’s head, a dab of the Poundland’s 'Hard as Nails' seemed to do the trick and as it started to set I was able to splay out the wires giving the effect of veins.  I was hoping that the same technique employed for the body would be used for the head.  Making sure the polarity of the magnet was the right way round I secured it initially with superglue and then built up the join with more Milliput.  Finally more Green Stuff tendrils were used to disguise the rather manufactured look of the wires – it was working! 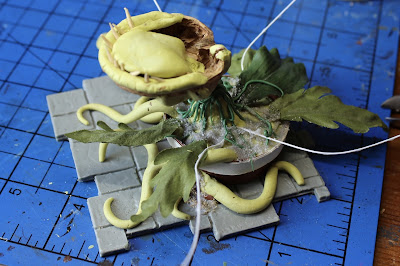 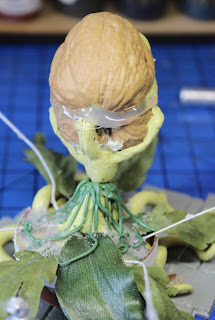 Teeth, so important, but how to do them?  Looking back at the example that had inspired the original build, Ssendam had used some plastic card cut to give a ferocious row of teeth, but given that my plant is based on Audrey II I wanted to try and pay homage to the creation in the comic/films a bit more.  Eventually I stumbled upon the idea of using the pointed end of a cocktail stick, but I now needed some way of fixing them to the walnut. 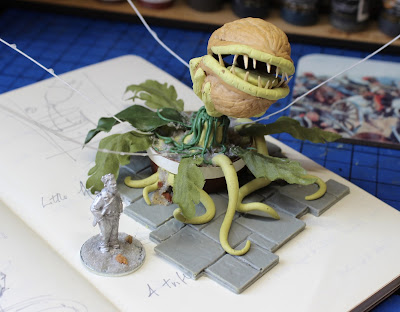 Rolling out my Milliput again I simply embedded the teeth into the gum, but this just didn’t look right.  Initially wanting to avoid Audrey II’s luscious lips for fear of not doing them justice, I resigned myself to giving it a go by way of making the teeth sit properly in the mouth.  Things started to take shape and as the Milliput stated to harden I gave the teeth a sealing coat of PVA at their base to hold them in place.  Now feeling more confident with the material a tongue was fashioned and finally it was time to fix the top and bottom halves of the mouth together.

Seymour: Does it have to be mine? 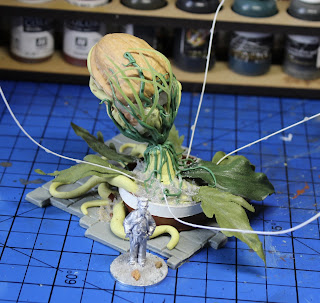 There was a brief moment when I considered the possibility of having the mouth hinged in some way allowing for movement of perhaps miming!  But in the end copious amounts of glue gun glue were used to fix the two halves together and seal the gaps.  Once secure the final stage was to match the tendril effect of the lower neck to the head again using Green Stuff.  This was a little bit haphazard, but after much fiddling and cursing we started to achieve the desired effect.  Again as the Green Stuff started to harden a light wash of watered down PVA glue helped to seal the work and hopefully made the fix a little more permanent.  This in essence was the end of the build and so another patient wait  is required before the whole thing can be undercoated, hopefully linking everything together. 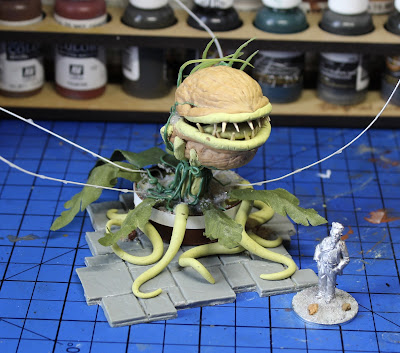 Audrey II: Feeeed me!
Posted by Michael Awdry at 09:00