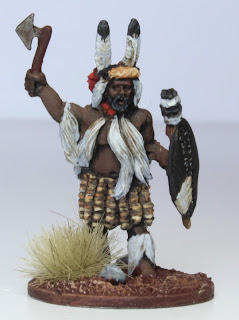 Regular readers of this most humble weblogs may recall that as part of the ‘VI Analogue Hobbies Painting Challenge’, I foolishly threw down a gauntlet to Martin Cooke, of ‘28mm Heroes’ fame to paint as many Zulus as possible over the winter months.  I detailed the preparation in an earlier post, 'Cetshwayo Challenge’, along with the first of my brave warriors, but sadly I just couldn’t catch Martin.

Thanks to the very charitable handicap system we had employed I managed to make it interesting, but ultimately I fell short by five miniatures.  Martin has now received his painted Induna and I have gone away and licked my virtual wounds, but the project didn’t end there.

Having based the miniatures individually* I needed to paint up some movement trays for ease in getting them around the battlefield.  With another quality product from ‘Warbases’ in hand, I set to work with my trusty Dremel and just smoothed the leading edge of each tray to make it appear less like a step.  The application of some Vallejo Red Oxide texture paste and a couple of stone and the effect was complete.
*Mostly due to not having a clue as to what rules I am going to use with them. 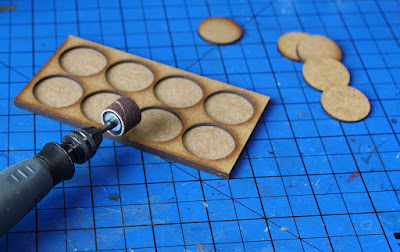 Having painted the movement trays to match the miniatures, I am now in a position to show off the fruits of my labours.  I had hoped to add some battlefield clutter to the bases and had identified all manner of extras including shields, assegai even a discarded British infantryman’s helmet, but when it came to applying them, there just wasn’t as much space as I had thought so I will need to rethink that idea for another time.

So although a runner up on this occasion just being part of the 'Cetshwayo Challenge’ gave me the much needed impetus to complete the original box of thirty two miniatures painted to represent the Indluyengwe (Leopard’s Den) Regiment that fought at Rorke’s Drift.**  So once again, thank you to Martin for being such a good sport throughout the challenge and hearty congratulations on being such a well deserved winner.
** Black shields and a white spot in the lower half.