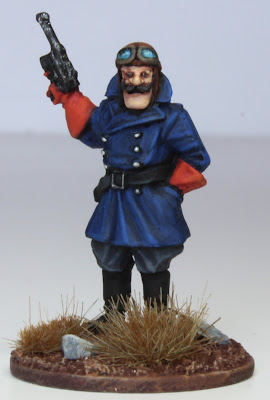 Hopefully by now, you will have seen Simon’s post on his wonderfully entertaining ‘Fantorical’ blog* showcasing the spoils of  his recent victory in a little side duel that we had as part of the ‘VI Analogue Hobbies Painting Challenge’.  Although I managed a few meagre points in this battle of the brushes they fell someway short of my fellow combatants, with Simon emerging the overall Champion.

*It seemed only right and proper that he have the first opportunity to post about the miniature – after all it is his and I only mention it here so that it qualifies to be added to my tally for the year, and after ‘Salute 2016’, I desperately need to redress the balance a little!
So this being the ‘The Pulp Challenge’, with Pulp being defined as being from 1850-1950, I wanted to paint something for Simon that fell into this category.  After much scrabbling around the periphery of the lead pile, I managed to unearth ‘Group Captain Villain’, a particularly splendid sculpt from ‘Artizan Designs’ and certainly one that would suit my needs. 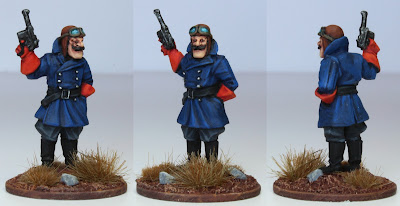 On closer inspection of the miniature, I was instantly reminded of one Richard ‘Dick’ Milhous Dastardly, the much maligned ‘hero’ of the hugely enjoyable Dastardly & Muttley in Their Flying Machines**, which charted the hapless ‘Vulture Squadron’s’ efforts to ensnare the courier, Yankee Doodle Pigeon.

"Drat, drat and double drat!"
Now completely unable to shift this mental image from my addled brain, I set about trying to recreate Dick Dastardly’s flying attire as best I could.  When complete, and without thinking, I gave him a liberal coating of matt varnish, but suddenly realised that this might be not to Simon’s tastes as he is rather fond of protecting his miniatures with a wonderful high gloss glaze. 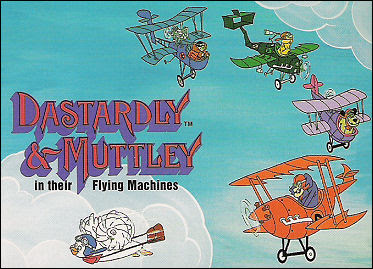 With forfeit now completed and delivered, I have put aside miniatures that might represent the rest of the Vulture Squadron, sadly lacking a suitable Muttley at this point, just in case we have a similar challenge next year!


**I should stress that this is a children’s animated program from the late 1960’s and seemingly re-run endlessly in the 1970’s for young Master Awdry to enjoy and not some lost celluloid gem; nostalgia is a wonderful thing.
Muttley, you snickering, floppy eared hound.
When courage is needed, you're never around.
Those medals you wear on your moth-eaten chest
Should be there for bungling at which you are best.

Nab him
Jab him
Tab him
Grab him
Stop that pigeon now!

You, Zilly, stop snickering, it's not worth the chance.
For you'll be returned by the seat of your pants.
And Klunk, you invent me a thingamabob
That catches that pigeon or I'll lose my job.

Nab him
Jab him
Tab him
Grab him
Stop that pigeon now!
Posted by Michael Awdry at 08:59