What a Lovely Day! 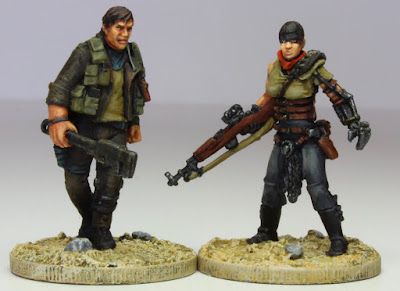 Another post left over from the ‘VI Analogue Hobbies Painting Challenge’, this time part of my entry to the ‘Gambler/Risk-Taker’ bonus round that saw me start to formulate a somewhat convoluted plan in order to use the splendid 'Westfalia Miniatures' Wasteland Survivors that I had backed as a Kickstarter. In essence this was going to be an homage to the Road Warrior himself, after all surely he could be regarded as a Gambler or Risk-Taker? 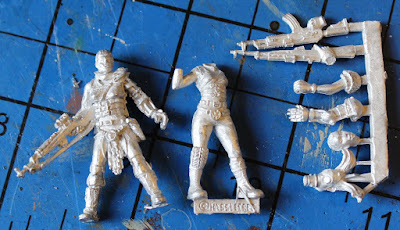 Just as I was about to hit the nitrous oxide button on the idea, I realised that I didn’t actually have a ‘not Max’ miniature and not wanting to see the idea go to waste, I did want any self respecting hobbyist would do in this situation and ordered more miniatures! Having just seen the latest instalment, Fury Road, I plumped for 'Hasslefree Miniatures' Oscar and Foxtrot.  As usual they were exquisitely sculpted miniatures, but I am afraid that I rather bottled the Foxtrot miniature, I just couldn’t face pinning the hand holding the rifle to the slender wrist and instead ordered up another variant, this time from 'Crooked Dice Game Design Studio' – what a lovely day! 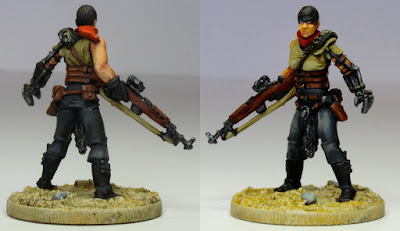 My choice of Imperator Furiosa decided, it was just the small matter of painting her and this is where the delay in presenting this post has originated.  Furiosa sports a buzz cut with her forehead often smeared with axle grease perhaps as an indication of her rank of Imperator.  In essence this was all fairly easy to achieve as I just left the top of her head black, but then I went and messed about with the eyes!  Having photographed the miniatures for the challenge, I was never truly happy with the result and took the opportunity of tinkering with her a little before posting here.*
*The original version can be seen in the group shot at the bottom.

As for Mad Max Rockatansky, I simply drew inspiration from the film an opted for a series of dusty browns, blacks and greens to represent the battered and broken Road Warrior.  The detailing on this particular 'Hasslefree' sculpt is just amazing and I kept discovering elements that I had't originally noticed.  Kev White has also sculpted several options with regards to weapons and accessories, but the huge monkey wrench was just too hard to resist.  Finally then a group shot of my Post-Apocalyptic survivors, a painful reminder that I have yet to touch my 'Across the Dead Earth' miniatures and rules and have also gone and backed the recent 'This is Not a Test' hardback rules from 'Worlds End Publishing'- there simply ins't enough time!