'There is your enemy! There are your guns!' 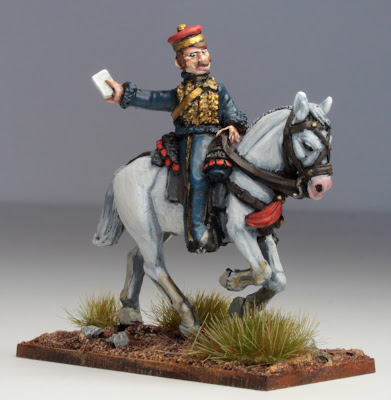 Captain Nolan, the second miniature in the Charge of the Light Brigade Character Pack from ‘Great War Miniatures’ distributed in the United Kingdom through ‘North Star Military Figures’.  A one piece cast that I have to say, I was less than enamoured with.  The sculpt of the horse was superb with particular attention given to the saddlery, my issue, however, was with the face that just seemed to be badly misshapen; not the end of the world really but a little disappointing given that this was a ‘character’ pack.  That said Captain Nolan is displayed nonchalantly waving the written order in the direction of the Russian guns – the prelude to what would become one of the most disastrous cavalry engagements in history. 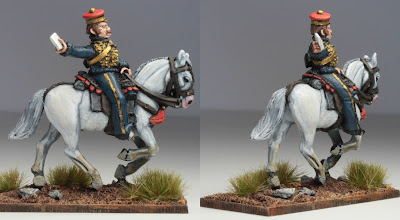 Much has been written about the charge and who was to blame, certainly reading contemporary reports the dashing and enthusiastic Nolan finds much of the responsibility placed at his feet.  Perhaps not the time to debate the matter here, suffice to say that this chap’s opinion is that the whole catastrophic event was the result of a series of disastrous decisions and interpretations that, combined, led to the finest Brigade of Light Cavalry ever to leave the shores of England smashed by the force of the Russian guns. 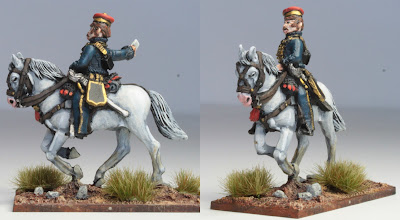 Did Captain Nolan deliberately misinterpret the order or even embellish Lord Raglan’s verbal command?  We shall never know, but what is not disputed is that he was the first casualty of the charge; an exploding shell sending shrapnel through the young office’s heart.  The infamous hand written order can be seen below. 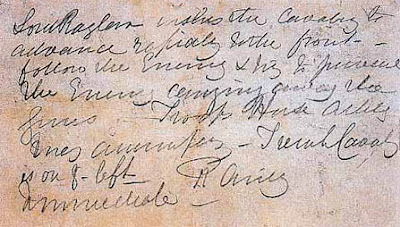 ‘Lord Raglan wishes the cavalry to advance rapidly to the front, follow the enemy & try to prevent the enemy carrying away the guns. Troop Horse Artillery may accompany. French cavalry is on your left. Immediate. R. Airey.’

Perhaps the last words on the whole disastrous event should be those of the French Marshal, Pierre Bosquet, who having witnessed the charge is reputed to have said,

"C'est magnifique, mais ce n'est pas la guerre." ("It is magnificent, but it is not war.")