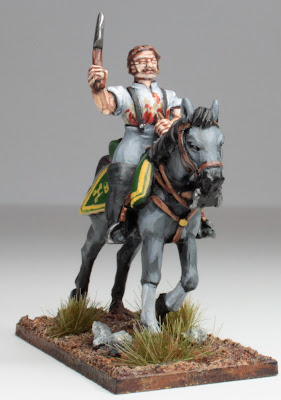 Having completed my latest instalment of the Flashman papers, 'Flashman at the Charge' it seemed only appropriate to paint up a miniature that was in some way related to that ill fated cavalry engagement during the Crimea War of 1854.

This fine, two piece miniature was part of a Charge of the Light Brigade character pack from 'Great War Miniatures' available through 'North Star Military Figures' and was great fun to do.

I first became aware of the exploits of Trooper John Vahey of the 17th Lancers when reading Terry Brighton's wonderful, 'Hell Riders'.  'Butcher Jack' is one of those characters that populate the annuls of British Military History, the sort of chap legends are crafted around.   Acting as the regimental butcher, Jack spent the night before Balaclava under guard because of over-indulging in commissariat rum.  When he awoke the next morning, "deucedly muzzy" the camp was empty, returning to his tent for a refresher from an inexhaustible rum bottle he became aware that the Light Brigade was forming up in the valley below.

Although no regimental mounts were available to him, 'Butcher Jack' was able to take advantage of a riderless Russian pony, its saddle emptied by the 'Charge of the Heavy Brigade' earlier that morning.  So it was that Jack Vahey trotted up to take his position in the line still in his bloody overalls and wielding a butcher's axe.

'Butcher Jack' would go on to survive the charge and avoid a court martial instead he was awarded a Distinguished Conduct Medal for his actions on that fateful day.