The big day has finally arrived and I would just like to take this opportunity to wish one and all a very
Happy Christmas.

I have to confess to being somewhat sceptical at starting a blog but have thoroughly enjoyed posting and maintaing '28mm Victorian Warfare'.  I must thank all of you that have visited and followed but in particular a huge thank you to those of you that take the the time to leave comments.  The encouragement  this engenders is immeasurable and not only maintains the enjoyment but helps to build the sense of community that has been an unexpected, but wonderful, by-product of 'blogging'.
The Christmas Truce 1914 was a free gift with my subscription to 'Wargames Illustrated' and today, of all days seemed like the perfect time to share it.  I couldn't resist jazzing up Tommy's scarf and hence my homage to the one true Doctor, Tom Baker.  Happy Christmas everyone! 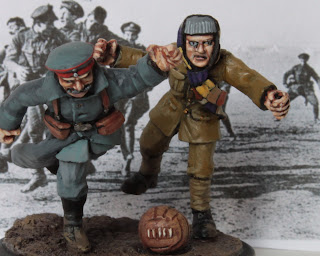 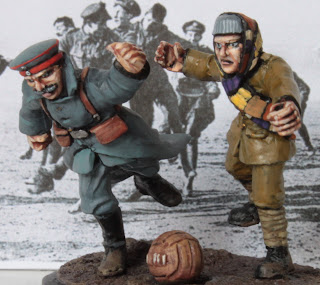 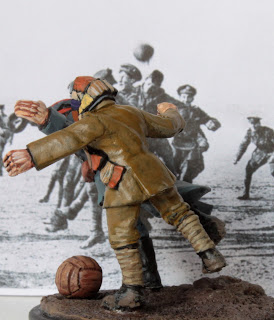 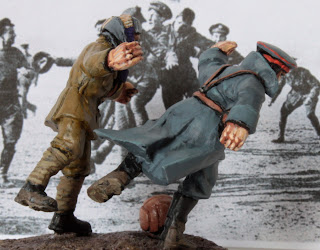 The legend of the Christmas Truce continues to live on, this rather poignant retelling is by Dr H J Krijnen and can be found at the Royal Welch Fusiliers' Regimental Museum website.

On Christmas Eve 1914 the Germans in the trenches opposite "A" Company, 2nd Battalion Royal Welch Fusiliers, had been shouting across, but on the morning of Christmas Day everything was quiet. One of the Fusiliers, Pioneer Sergeant J.J. "Nobby" Hall, stuck up a board with "A Merry Christmas" on it and the enemy stuck up a similar one. Then, around noon, a German was seen coming out of the fog along the tow-path, his hands in the air. Private Ike Sawyer went out to meet him. The two shook hands, and Sawyer was offered a box of cigars.
More Germans were beginning to leave their trenches. The Welsh had been strictly forbidden to do the same, but they began throwing tins of bully beef and plum and apple jam across. By then several unarmed Germans were standing on their parapet, waving their arms and shouting "Don't shoot! We don't want to fight today. We will send you some beer." Three of them hoisted a cask on to the parapet and began rolling it across No Man's Land.
The commander of "A" Company, Captain Clifton Inglis Stockwell, later wrote that he was warned by a worried duty sergeant. Stockwell climbed over the parapet and shouted in his best German for the opposing company commander to appear.  A German officer emerged and walked into No Man's Land where he was met by Stockwell. Both formally saluted. The German introduced himself, in Stockwell's words, as "Count Something-or-other." We now know that he was Hauptmann Maximilian Freiherr (Baron) von Sinner, the commanding officer of the Machine-gun Company of the Prussian 6th Jäger Battalion from Oels in Silesia which had been attached to the Saxon 40th Division and held the German positions in the Frélinghien brewery.
Von Sinner then called out his subaltern officers, and all were formally introduced to Stockwell "with much clicking of heels and saluting." Stockwell pointed out that he had orders not to allow an armistice and that it was dangerous for the German troops to be out in the open. Von Sinner agreed, having received similar orders, and sent his men back into their trenches. Both officers then agreed to a truce until the following morning.
Stockwell continues, “I did not know what to of­fer them for their courtesy but suddenly I thought of a plum pudding and hoped the officers would accept. I then went off to get it and the Saxon got his men back to the trenches. When I returned I gave him the pudding. He then produced two bot­tles of beer and a glass. I drank his health first (cheers from both sides) then they drank my health (more cheers). Then I talked a little and asked after the German of­ficers I knew in China. Then we had a ceremonial farewell, many salutes and bows, and re­turned to the trenches. "
Private Frank Richards tells a somewhat different story in his classic "Old Soldiers Never Die" which was published in 1933. According to him, so many Fusiliers had already left their trenches that Captain Stockwell had no choice but to accept the situation and with his fellow officers also walked into No Man's Land. Instead of staying in the trenches as described by Stockwell, Richards says that "We mucked in all day with one another" and goes on to report conversations between the Welsh and German troops. Only at dusk did the men return to their respective trenches. This story has the ring of truth. Richards could not care less about military propriety and described things as he saw them, while a serious loss of control as evidenced by the men "mucking in with one another" would not be something that a strict disciplinarian like Captain Stockwell would want to admit to even in his own diary. A recently discovered article in a contemporary Welsh newspaper, containing an interview with 2nd Lieutenant Michael Murphy, confirms the version given by Richards.
Richards spoke to several German soldiers. He found that they were as fed up with the war as the Welsh were, "fed up to the neck" as he puts it, and that their trenches were in a similarly bad condition. The men only returned to their respective trenches at dusk, in time for their Christmas dinner of Maconochie’s (tinned meat and vegetables) and plum pudding.
During the evening and night not a shot was fired by either side. On the morning of Boxing Day Captain Stockwell climbed up on the parapet, fired three shots in the air and put up a flag with "Merry Christmas" on it. Hauptmann von Sinner then appeared on the German parapet and both officers bowed and saluted. Von Sinner then also fired two shots in the air and went back into his trench. The war was on again.
But it remained quiet. According to Richards, all during Boxing Day there was much shouting across No Man’s Land, often about the quality of the French beer. Peace reigned all day, and songs were sung in Welsh and German. In the evening, when the 2nd Battalion was unexpectedly relieved by the 2nd Durham Light Infantry, the men heard that similar things had been happening all along the lines.
It had indeed been a memorable Christmas.
HJK