These rather splendid fellows are here as a direct result of my seemingly obsessive search to find miniatures that, in some way, illustrate the most recent book to leave the bedside table.

Now I know very little about Ancient Roman history other than what is portrayed on the silver screen or written in popular literature and even less of the Roman Navy.  If I'm brutally honest I don't suppose that I had given  much thought to a navy at all, until I read the opening chapters of Conn Iggulden's 'The Death of Kings'.  Here the fictional exploits, although I understand there is some factual basis, of a young Julius Caesar unfold.  The wonderfully vivid descriptions of the warfare aboard Roman galleys at this time certainly fired my imagination and so you can imagine my delight to find that 'Warlord Games' actually produce a set of Roman Marines!  Given my painfully slow rate of progress at present I've opted to do only one of each pose. 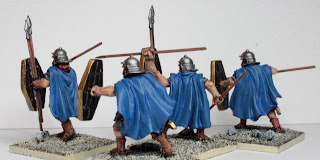 I'm becoming more and more impressed by 'Warlord Games', great sculpts, fantastic service and some very shrewd alliances;  I was able to also pick up a set of shield transfers originally created by 'Little Big Men Studios' on the same site.  Will certainly be looking at returning there when I get round to reading the next instalment. 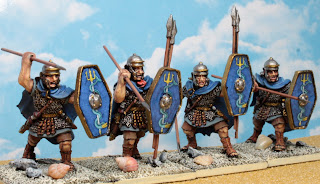