Through the Swamp - The Conclusion.

So here it is, the conclusion of my mini project to recreate an 'American Civil War' trading card! 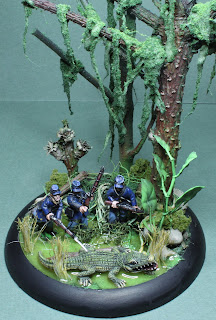 The original card, printed in 1965, was part of a much larger set and a gift from my father when I was a boy.  Known as 'Civil War News', the cards depicted historic events or battles that occurred during the war, their graphic violence leaving a lasting impression on a ten year old Mikey.
With the figures and alligator safely attached a little sisal string was used to represent the reeds and weeds.  These were positioned with P.V.A. and needed a little bit of colour to tone them into the rest of the piece.  Although the base only had a very shallow lip, it was enough to allow me to flood the remaining space with a clear drying resin.  This was my first attempt at a water effect and so I was a little apprehensive, worried that I was going to ruin several weeks worth of work!  Fortunately a colleague was on hand, thanks Jemma,  to guide me through the curing and colouring process so all went according to plan.  There was just a little more painting and leaf litter to add and then finished.  I have picked up so many useful modelling tips along the way  and without wishing this post to read a little like an acceptance speech, there are one or two people I would like to thank:
'Provost Marshal', whose generous donation started the whole thing off.  See 'a Beer and a Bag' for further details.

'Laughing Ferret' over at the 'Laughing Ferret Lab'; your tutorial was superb and carefully guided me through the pitfalls of constructing 'Spanish Hanging Moss'.

'Captain Richard' of 'Captain Richard's Miniature Civil War'; your piece entitled 'Weeds' was simply superb and really helped me to visualise what had previously been just a collection of random thoughts and ideas.

Finally a huge thank you to all of you who have taken the time to post comments along the way as the project developed.  They really do help to keep the spirits up and make the process have a very definite sense of direction. 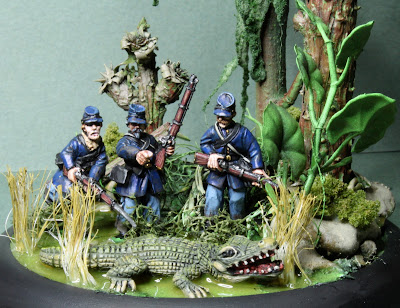 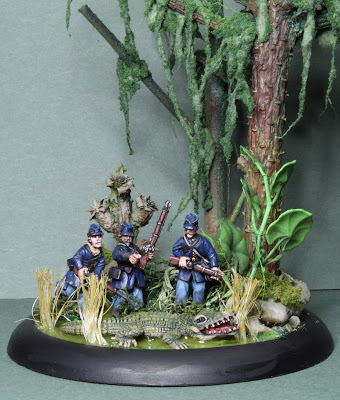 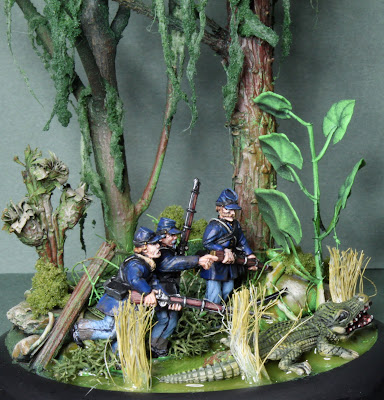 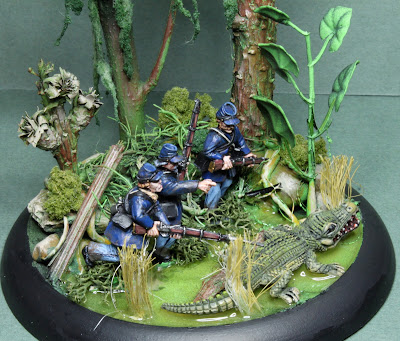 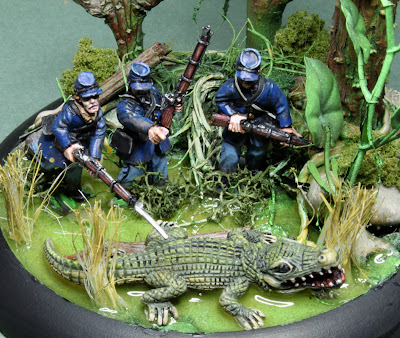