Through the Swamp - Part 3, The Build 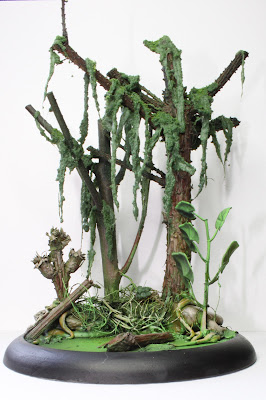 Having had expected to have been at work this weekend I was thrilled to find that the event was rescheduled presenting with  a little priceless time to move on the 'swamp' build.  There has always been a clear objective in that I wanted to recreate a 1960s American Civil War trading card using 28mm miniatures.  The Union boys and the alligator safely completed I needed to turn my attention to the matter of the swamp itself.  I had collected together all manner of different bits and pieces and had recently seen some wonderful examples of model making that served as inspiration.  Captain Richard's wonderful 'weeds' post and the Laughing Ferret's wonderful 'how to' for 'Spanish hanging moss' been two of the most influential.

The base is a 10cm diameter 'Fenris' casting bought through 'Hasselefree Miniatures' that I had kicking around and on to it went all manner of things including real stones, twigs and roots (thank you Captain Richard).  There was also bits of aquarium plastic plants, hand sculpted root system even bits of Christmas tree made an appearance.  I had roughly planned where the miniature were going and consequently left a space for them. 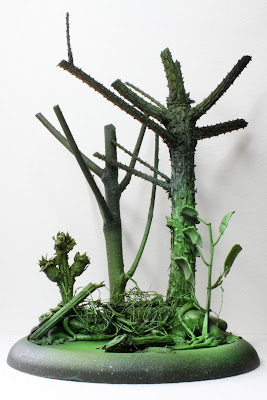 Once the glue and household filler had dried the whole thing was sprayed black and then sprayed again with a couple of different green sprays I had left over from the 'Bamboo' build. 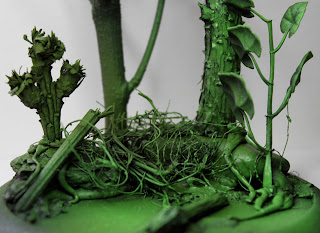 Again once dried I started to pick out details using a suitably muted palette and then followed the 'Laughing Ferret's' tutorial for the hanging Spanish moss.  It really does take you back to play school but was wonderfully effective. 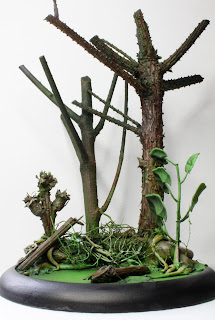 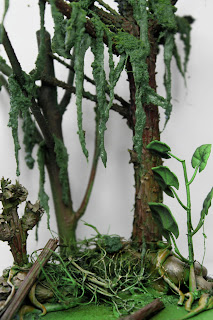 So now its just a case of placing the figures, probably a little more painting and final details and we should be there!
Posted by Michael Awdry at 12:44