A great fan of Rugby Union, particularly the internationals, I was already fully aware of the famous New Zealand 'Haka', traditionally performed by the 'All Blacks' prior to the start of a match.  It is very difficult not to be mesmerized by the sheer passion and spectacle of the event.  The reason for mentioning the 'All Blacks' here, however, is to point out their chosen emblem - the silver tree fern -  Cyathea dealbata.  Like many countries New Zealand has adopted a floral emblem (here in England we have the Tudor Rose) and theirs appears to be the Silver Fern, which is clearly part of the bracken family.  Anyway I digress, what I wanted to do was to incorporate this emblem into the bases for my recent Empress Miniatures, New Zealand Wars Maoris, giving them a unique 'Kiwi' theme.
I had spied some etched brass items on the Hasslefree Miniatures website and on further inspection was delighted to see that they actually had a sprue of bracken itself!  As you can see they arrive in delicate flat sheets with the individual leaves on small stems.  They needed a little bit of clipping to release them from the sprue and although I can be seen here attempting this feat with a pair of snips I later found it much easier to do with a sharp craft knife or scalpel. 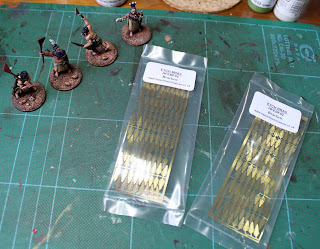 Initially I thought that I would cut pairs of leaves and glue them, with superglue, to the bases.  All good in principle but I had already prepared the bases and was left with the prospect of having to fiddle around in order to complete the task of painting the ferns.  In a blinding flash of inspiration, it doesn't happen often, I decided to prime the ferns on the sprue using Games Workshop 'Chaos Black' spray. 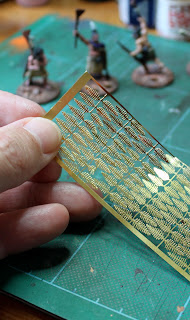 With this successfully achieve I also made the executive decision to use more ferns for each base allowing me to twist the brass to shape to give more aesthetically pleasing results.  I was struggling with the superglue and in the end opted for the quick fix of the trusty glue gun.  Even though I knew that this would leave a very obvious 'blob' of glue I was happy to accept this in return for a quick and solid fix.

With the fern safely in place it was just a case of painting to requirements including, of course, the offending 'blob'.  When it came to the final basing I continued to camouflage the 'blob' with a little static grass and the occasional tuft in a bid to mimic the lush pastures of the North Island.


In the end, although a little more time consuming than I had expected, I am particularly pleased with the results as it does help to theme the unit together and at the same time give a brief nod to the strength of this proud nation.  With regards to the British units, I have mimicked the tufts and grass but not the ferns deciding, instead to reserve these for the Maoris themselves; a sort of home turf advantage if you will. 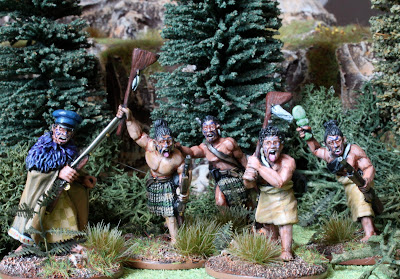 Please enjoy the the movie below of the 'All Blacks' performing the Haka before a match with my beloved England.  I cannot vouch for the translation but you get the general idea.  Whilst clearly intimidating, (I can remember when they would creep ever closer towards the opposition so that in the end they were face to face - awesome), I am led to believe that it is also a mark of respect for a worthy adversary.
Interesting Fact: The 'Silver Ferns' is the name given to the New Zealand ladies' netball team.
Posted by Michael Awdry at 12:14