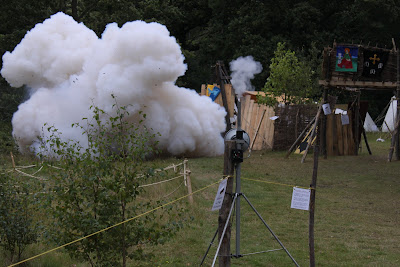 This is the moment which left a ringing in the ears for some considerable time as the shock wave of the mighty bombard roared past us; the climatic moment of a wonderful display during our recent visit to England's Medieval Festival at Herstmonceux Castle last weekend.
The festival itself runs for three days with plenty to see and do including reinactors storming the magnificent 15th Century moated castle, music, pageantry, skill at arms contest, falconry and of course mead!  For me however one of the main highlights had to be the 'Compaignie of Seint Barbara'.  This living history group represents a mercenary Burgundian gun company and provided the 'gunners' for the event; the star of the show being 'Pyppes Dowghter', the mighty bombard.   This "one and a half tons of medieval fury" is a copy of an 'English' design built around 1450. 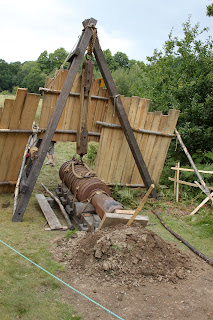 Vital Statistics: 8' Long, 15" Bore and weighing an impressive 1.5 tons!
Mounted on an oak firing sledge and requires the assistance of an elevan foot high oak and elm lifting 'gyn', Pyppes Dowghter is said to by far the largest working replica of this type in Britain. 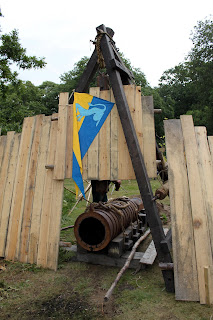 This beastie would fire a limestone cannonball, which may have been wrapped in lead and weighing 140 pounds (that's ten stone!) up to a mile in distance!  Truly an awesome sight to behold.