"Never get out of the boat." 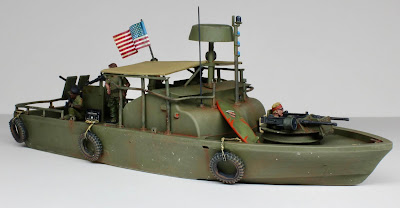 If there was a plan to this somewhat frivolous diversion of mine then it was to have posted some work in progress shots of a terrain piece that I had been working on as part of Dave Stone's, 'Summer of Scenery Challenge'.  Unfortunately I have been diverted from my diversion by this, quite wonderful, 'Empress Miniatures' PBR, which has rather taken over proceedings.  I had seen that this was in the pipeline and decided that it was going to be an end of academic year treat to myself, so as soon as it was available, I ordered up the full kit along with the crew, sculpted by Paul Hicks, all wonderful likenesses for the characters from Apocalypse Now. 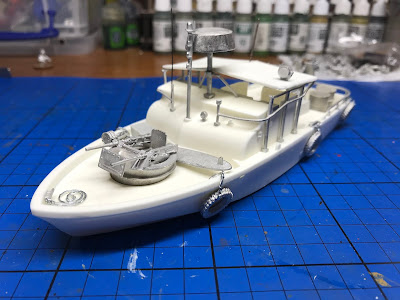 I had shown a couple of teaser photographs in earlier posts, but it is probably worth mentioning again here that this is an amazing body of parts, but took an age to assemble.  With no instructions you really are left to make your own decisions, which can be quite daunting, but I was keen to base mine on the boat from the film and so was fortunate that there were plenty of stock images to work with.  This meant dispensing with the 40mm Mk. 18 Grenade Launcher, for example, normally situated on the amidships engine compartment shield. 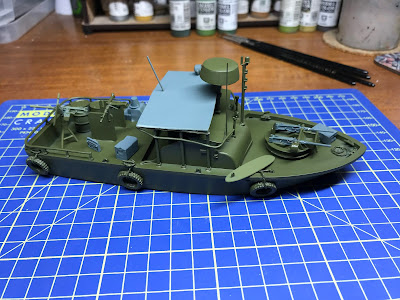 Just preparing and siting the eight tiny cleats saw me scrabbling around on hands and needs, muttering the occasional strong word, as I tried to locate the latest escapee that fled for the apparent safety of the carpet pile! Other noteworthy incidents involved me snapping off the 'cast' rope that was to hold one of the tires to the side of the boat. This turned out to be somewhat fortuitous as I realised that the metal rope was too thick to wrap around the aforementioned cleat and so snipped it away from all the other tires and replaced it with some thin wire, which could be affixed as intended. 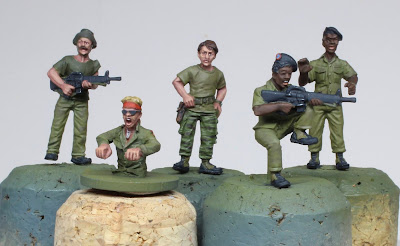 The kit comes with some wonderful extras such as Lance's surfboard, purloined from the Air Cavalry, even Mr. Clean's boombox.  To these I added some stowage and fuel drums, even a aerial fashioned from the Saintly Mrs. Awdry's dustpan and brush set, the fact that I had to ask where she kept it wasn't lost on her. 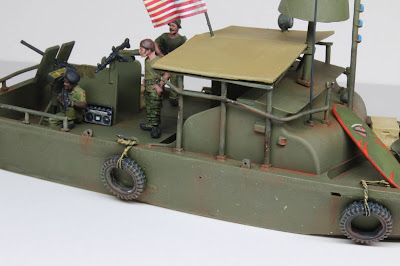 As fiddly as the kit of parts was, I stuck with it and as soon as it received an undercoat of paint was delighted that I had.  Instantly brought together with the green and grey primer, the piece really started to look the part and I couldn't wait to paint it, all previous plans abandoned in a heartbeat. 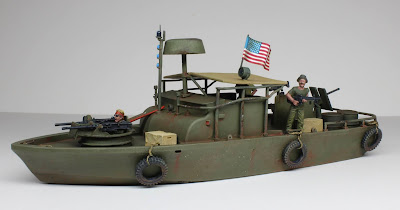 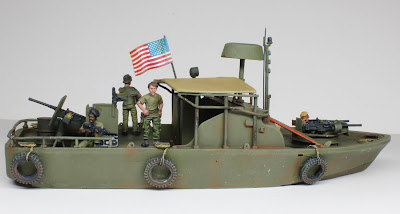 Given that Lance, the forward gunner, needed to be sited before fixing the guns in place, I decided to paint the crew first.  Again, Paul Hicks has done a superb job with the miniatures, wonderful likenesses and some great touches, like Chef's cigarettes tucked into his T-shirt sleeve.  Captain Willard initially held a greater likeness to the chiselled features of Martin Sheen, but it would appear that in my haste to prepare them, I had run my file across his face, reducing his nose to one any heavyweight boxer would be happy to sport!  With regards to colour it was simply more green, but items like Willard's tiger stripe trousers and the shoulder patches of some of the crew offered a little more variety to the palette. 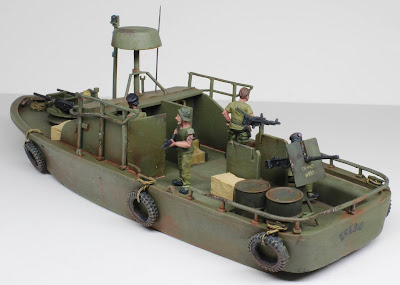 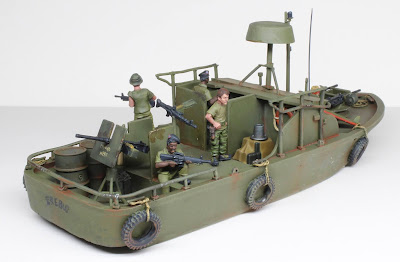 On to the boat itself and I followed, pretty much, the same process that I used for the WWII Sherman tanks earlier in the year.  A pin wash of Vallejo Cavalry Brown around the metalwork was followed up by a number of washes and dry brushed highlights.  Picking out a few details with the brush helped to lift the overall effect, with some gloss varnish applied to the lamps to hint at the reflective glass.  The lettering looked a lot tidier in real life than it does in these photographs, a sad symptom of my failing eyesight, but it still helps to complete the look.  The crew are pinned, but not glued in place, allowing them to be repositioned or swivelled and similarly, I couldn't bring myself to glue down the canopy, which remains precariously balanced as I write this. 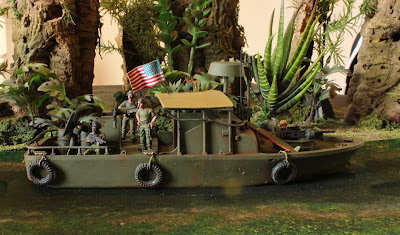 I really couldn't be happier with the finished piece and instantly decided that I needed to set up some terrain to take some photographs, much to the annoyance of the Saintly Mrs. Awdry, whose dining table became an uncharted river for the the craft to patrol.  I stopped short of releasing a smoke grenade, not that I had one to hand you understand,  deciding instead that some subtle use photo editing was the way to go... 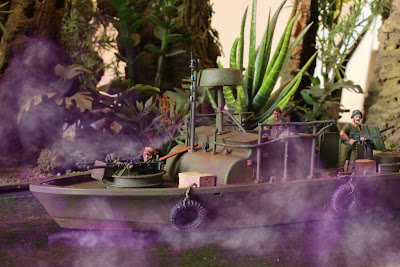