A Cross of Iron 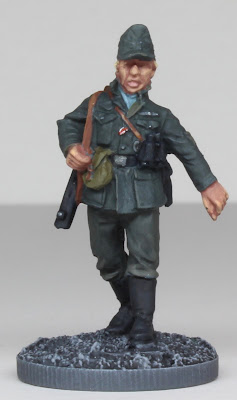 I have always found it difficult to resist a movie or popular culture crossover when it comes to this most wholesome of hobbies and so it was that when I stumbled across these splendid miniatures from 'Empress Miniatures', my already weak resolve just caved in completely and an order was placed. 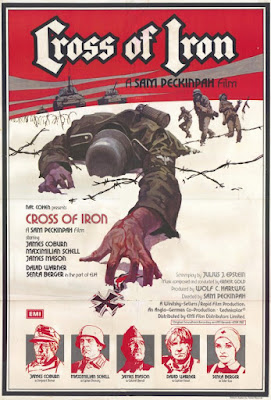 I have to confess that young Master Awdry was initially confused by Sam Peckinpah's 1977 'anti-war' film, Cross of Iron.  Its treatment of the Second World War was just so different to any other experience that I had had up to that point.  For one thing, I was been asked to view the beleaguered German unit, literally fighting for its life on the Eastern front, as the heroes of the piece.  The level of violence and portrayal of war so far removed from my previous sanitised experiences during the much loved films that I would watch with my father on a lazy Sunday afternoon. 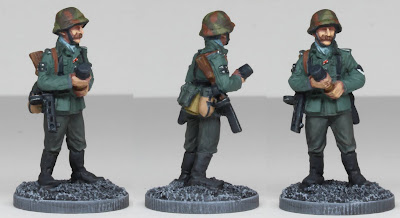 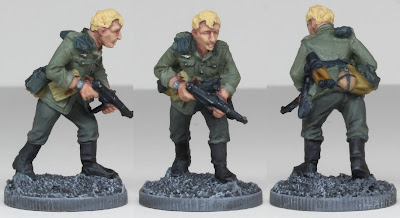 Now considered a masterpiece by many, albeit a lengthy self indulgent one, Cross of Iron has clearly had an impact on modern film makers, Quinton Tarantino being one such notable example.  For me it is the character of the indestructible platoon leader, Sergeant Steiner that is most memorable.  Played by James Coburn in the film, Steiner has to fight the war on two fronts, the Russians on one and the overly ambitious Prussian aristocrat, Captain Stransky whose desire to win the Iron Cross puts the men under his command in mortal danger on the other.  It is Steiner and members of his platoon that these four wonderful sculpts, by the talented Paul Hicks, represent. 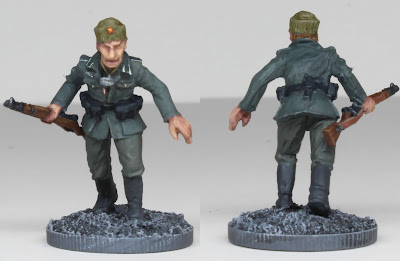 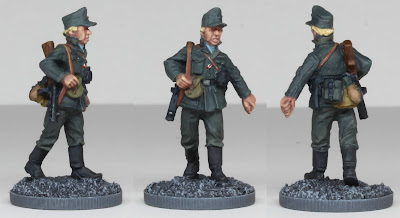 Cross of Iron aside, I plan to use the 'Steiner' miniature to represent Major Josef 'Sepp' Gangl, the man who led the German troops during the defence of Schloss Itter.  I appreciate that the weapon might be slightly anachronistic and indeed I probably should have considered displaying his rank more clearly, but there was something about the sculpt that just seemed to resonate with the picture that I had in my mind of the real Major Gangl. 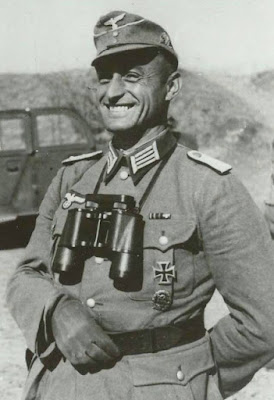 Josef Gangl was a career soldier who had joined the army at eighteen, moving through the ranks and serving almost exclusively with the artillery.  A highly decorated soldier, Gangl was awarded the Iron Cross 2nd class in 1941 and then received the Iron Cross 1st Class in 1942 whilst serving on the Eastern front.  He fought in France during the invasion of the allied forces then redeployed with new equipment, following heavy loses, to take part in the Ardennes offensive.  On March 8, 1945, he was awarded the German Cross in Gold and shortly afterwards was promoted to Major.  In the face of continued loses, he was ordered to take his battalion and fight his way back to the Tyrol to take part in the defence of the Alpine Fortress.  In the final days of the war it becomes clear that Major Gangl's primary mission was to keep the men under his command safe from the advancing Americans and marauding SS Troops.  To that end he contacts the Austrian Resistance and it is through this connection that he finds himself defending French Prisoners of War alongside American G.I.s at Schloss Itter.  Sadly Gangl was fatally wounded  by a sniper while trying to get former French Prime Minister, Paul Reynaud out of the line of fire. He was to be the only defender of the castle to lose his life on the day of the battle. 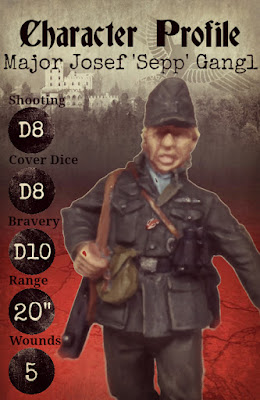 It seems only fitting that such an important figure in the battle should be represented and I am delighted to have found a suitable miniature, all inaccuracies aside. This has also meant that I have been able to fashion him a character card as well.  It is also lovely to have had the opportunity to paint some Paul Hicks' sculpts again, they really are exquisite.  The only draw back being that they are so accurate that I worry about the details, spending an inordinate amount of time trying to make up my mind as to how to approach them.  As with all such conundrums it is sometimes better just to start and sure enough once underway the process went relative smoothly.  More 'Empress Miniatures' to come in the not too distant future, but a final group shot to end the post. 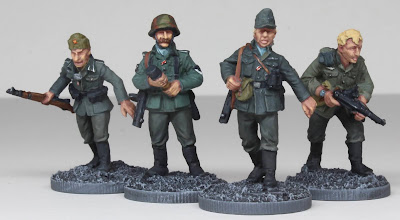