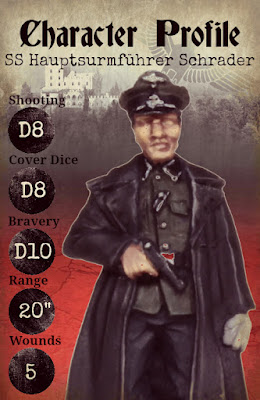 So it turns out that working from home is considerably more time consuming than going to work, who knew?  It's probably just me, but I find the reliance on the technology, covering lessons I wouldn't normally teach and the obligatory preparation all sapping of my time and energy.  As a result, I have fallen behind on my own posts and those of the many splendid weblogs that I so enjoy following.  That said one of the benefits of being at home, and indeed working from the hobby desk, is that I have embraced the '10 minutes a day' approach to hobby time.  I say 10 minutes, but I can often squeeze in a little more in one sitting and so genuine progress has been made on a number of smaller projects that needed to be finished off.  The first of these is part of a series of character posts, this one showcasing, SS-Hauptsturmführer Kurt-Siegfried Schrader.

A decorated SS Officer, Schrader was seriously wounded in the fighting on the Normandy front, for which he was awarded the Wound Badge in Black having previously been awarded the Iron Cross 2nd Class and the Eastern Front Medal.  During his convalescence, Schrader had moved his family to the village of Itter.  It was here, on his many walks from his home to the castle, that he befriended the French prisoners and eluded to his growing disgust of the Nazi regime. 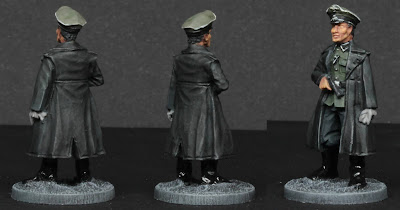 Having been released from service in the last days of the war, Schrader had returned home and hung up his uniform, but was persuaded back into action by the French prisoners he had befriended to act as their security and negotiator if they were attached; an appointment that would ultimately save the the former  SS-Hauptsturmführer from a considerably stretch in prison himself!  As it stands our rules allow for characters to be attached to units in the game.  SS-Hauptsturmführer Schrader can now be attached to a unit of French Prisoners bringing some much needed firepower to their dice pool. 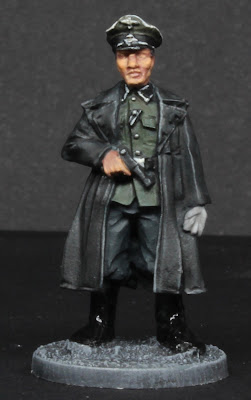 My representation of this unlikely hero in our story is a Stoessi's Heroes miniature available in the United Kingdom through 'Great Escape Games'.  My worry about painting so much black had seen this idea buried in the 'to do' pile, but a renewed desire to get things done saw me approach the problem from a differnt angle - namely don't use black!  To be fair I did use some, namely the boots, belt and collar tabs, but the rest is made up of a variety of different greys, highlighted and the washed with 'Games Workshop' Nuln Oil.