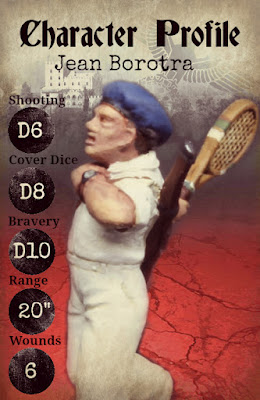 By their very nature the French V.I.P. Prisoners at the castle were high profile citizens, they were considered honour prisoners whose fame or importance was deemed useful to the German High Command; amongst them one truly exceptional individual was Jean Borotra.  Borotra had been a prominent French tennis player of the 1920s.   A Grand Slam champion on nineteen separate occasions, including Wimbledon twice, he was also part of the French National Team, known as The Four Musketeers, which included the likes of René Lacoste who in 1927 helped France win the Davis Cup for the first time. 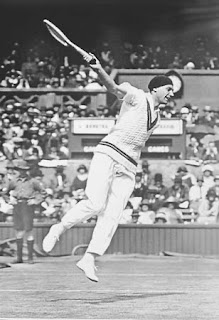 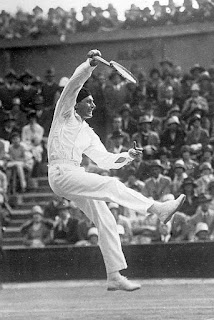 As a tennis player Borotra was a genuine crowd pleaser, always resplendent in his blue beret, famed for his sharp volleys and powerful overhead smashes which were to win him the nickname the Bounding Basque.  It was, however, his dalliance with politics that would see him imprisoned at Schloss Itter.  Borotra was a hugely patriotic man and had enlisted in the French army of World War I shortly after his eighteenth birthday.  He would would see extensive action, winning the Croix de Guerre and ending the war as a Battery Commander.  He remained a reserve officer at the outbreak of World War II and was involved in the fighting on the Lorraine front before his unit was completely surrounded.  Following France's capitulation, Borotra had initially sort to flee to England with his wife and son, but decided to stay in France to serve the country and was persuaded to join the Vichy Party as a Sports Commissioner, with the mandate to "morally re-educate" France's young people.  It was a post that he clearly enjoyed, political misgivings aside, but with the initial round up of Parisian Jews in 1941, Borotra banned all French sporting associations from competing against German Teams.  This was a stand that saw him fired from his position and during his bid to flee the country was arrested by the Gestapo and subsequently imprisoned.

On his arrival at the castle, Borotra worked hard on maintaining his physical fitness by running laps around the courtyard, in preparation for three escape attempts!  Each time he was recaptured and sent to his room for a period of isolation.  During the battle itself, when it looked as though the defenders, who were perilously short of ammunition, were about to be overrun, Borotra made one final leap of the castle's walls. 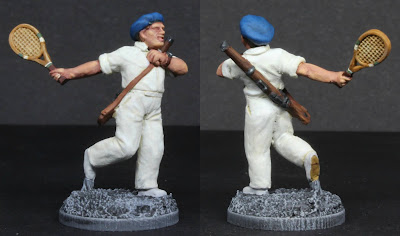 The plan was to locate and guide the American relief column to the castle by the quickest route and was potentially a suicide mission.  Unperturbed Borotra, disguised as an Austrian refugee, avoided capture and duly completed his mission delivering the message, before returning at the head of the column, now armed and in American uniform.  It would, of course, have been the simplest thing to have allocated one of the G.I.s to represent this hero of France, but I felt the man deserved something a little more creative and so began the search for a 1920s tennis player. 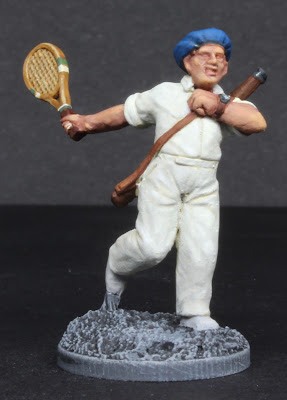 After an exhaustive search, I stumbled across a potential candidate in the form of an armed cricketer from 'Sloppy Jalopy'.  A 'Warlord Games' Polish paratrooper's head, minus the cap badge, was swapped in to represent the Bounding Basque with the final flourish being the tennis racquet from yet another 'Warlord Games' sprue, this time the female apocalypse survivors frame.

I am not suggesting for one moment that Jean Borotra leapt to the defence of Schloss Itter in his tennis flannels, but this was too good an opportunity to have some fun and still represent a genuine hero of the hour.