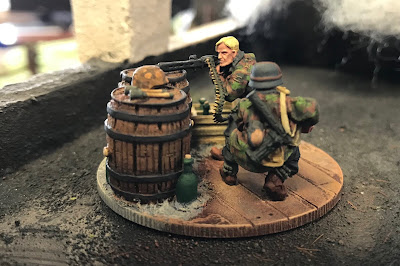 As a prelude to the battle the attacking forces made a series of probes against the defenders of the castle.  Eye witness reports talk of an MG-42 peppering the gatehouse and Besotten Jenny from Itter village to the East.  The outskirts of Itter were only 100 metres away and to represent its proximity to the castle James designed and built a suitably Austrian looking Inn.  This was to form part of our proposed talk, and indeed the extended game play, and presented me with a wonderful opportunity to create a little stand to represent those troops that opened fire from this vantage point. 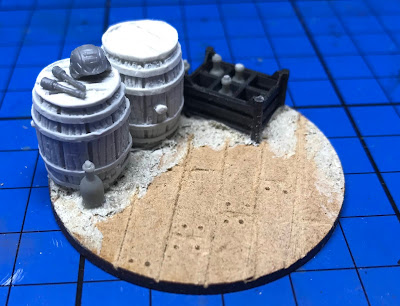 I should say at this point that the inspiration for this piece came from seeing an amazing Fallschirmjäger unit, appropriately titled, 'Let it Rip', painted by the very talented Nick of 'Moiterei's Bunte Welt' fame.  I just loved the narrative of the two troops taking advantage of the available cover to form a defensive position.  So it was that I decided to try and create an homage to Nick, but mine was to be based in the bar! 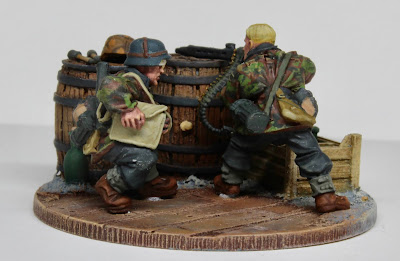 No sooner had I resigned to create such a piece than the idea floundered, I just couldn't find the right poses for what I had in mind.  The idea was temporarily shelved, but I couldn't shake it off completely and periodically I would come across bits and pieces that I would think might be useful, a barrel here a 3D printed crate there and before I knew it the groundwork was done. 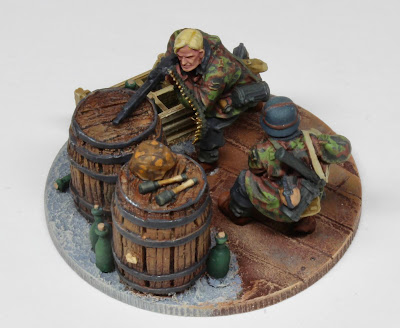 Determined to give the project one more go, I started looking more closely at the various companies that were producing likely miniatures.  Eventually it was 'Warlord Games' that came to my rescue and by using a combination of packs to obtain the requisite gunner and loader, I was able to source what I wanted.  With a couple of quick head swaps, this time using the 'Warlord Games' plastic Waffen SS sprue, along with a snip of the bullet belt the piece was complete. 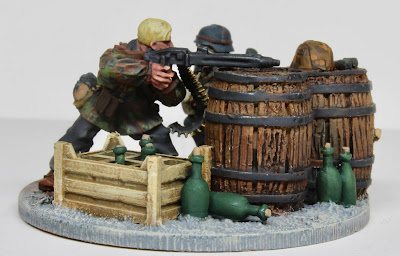 I had initially kept the miniatures on their bases, covering them with pumice gel, but given that this scene was to be set inside an inn decided to rethink this and opted to pin them to a 'Warbases' MDF base, which I had scored with a craft knife to give the effect of floorboards. 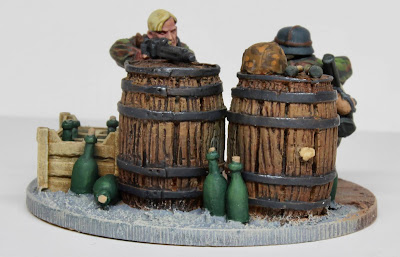 Whilst the piece had taken a lot longer to realise than I had expected, I have to confess that I am pleased with the outcome, can't wait to see it reunited with James' Inn hopefully in the not too distant future!