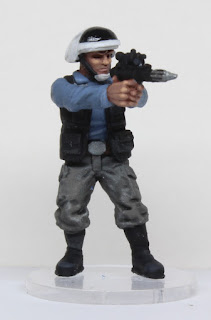 From the beleaguered troops of Echo Base featured in the previous post, to the similarly ill fated Fleet Troopers of the opening scene of a New Hope, I offer up more plastic loveliness from Star Wars: Legion.  Painted some time ago, these hard pressed troops have already seen active service on the tabletop and prove to be a resilient bunch, able to hold up an Imperial advance just long enough for a heroic character to save the day. 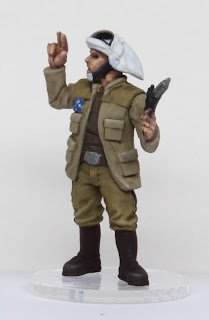 A relative quick paint job, the hardest decision was how to base them?  I have spoken about my dislike of the 'tall' Legion bases, but it also seemed somewhat incongruous to base these chaps on a scenic base with a carefully placed flower tuft or two.  Instead I opted for clear plastic so that they could go anywhere in the service of the Rebellion, confident of not fouling the immaculately polished decks of a CR90 Corvette! 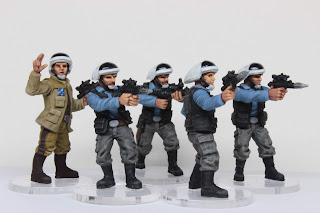 I was an avid collector of the Star Wars action figures as a small boy, not an easy thing to be in a sleepy town in rural mid Wales, but every so often the shelves of the only toy shop would be restocked.  I always hoped to find a Fleet Trooper amidst the other shelfwarmers, such was their impact from that opening scene, but sadly it was not to be.  I understand that one is available now, and in a variety of scales, but back then it seemed such an injustice for their sacrifice.  All the more reason that I am happy to see them swelling the ranks of my collection today.