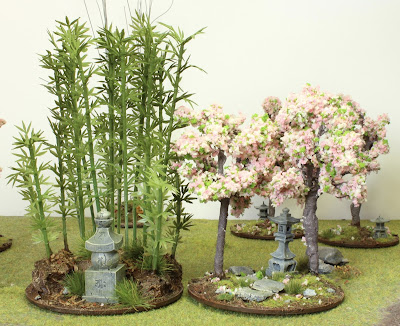 Following on from the previous post, and having run out of 40mm and 60mm ‘Warbases’ MDF discs part way through my Cherry orchard construction, I was left with two remaining trees.  Not wanting to abandon them, I decided to plant them together on the same base and as I offered them up to an 80mm MDF ‘Warbases’ disc inspiration struck! 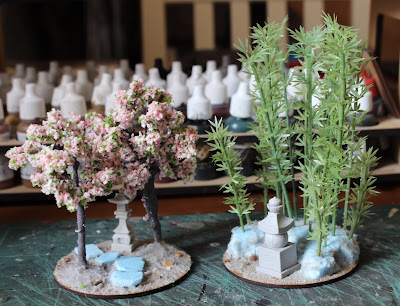 Although a smidge too close together they did give the impressive of forming a natural arch through which one might stroll whilst devising haiku.  To further enhance the illusion I decided to add a Shinzentōro Japanese Lantern, again from ‘Master Crafted Miniatures’ and some paving slabs to help avoid getting your Geta wet from the morning dew. 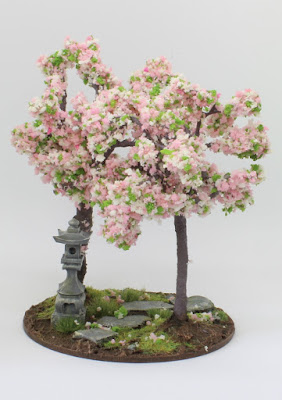 どういう奇妙なことだ！
生きている
桜の下に。
What a strange thing!
to be alive
beneath cherry blossoms.
― Kobayashi Issa 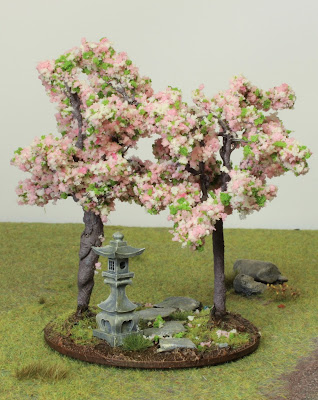 Feeling a bit pleased with myself with the Cherry Blossom archway, I reached for another 80mm MDF ‘Warbases’ disc, but this time I had another plan.  When I placed my order for the tree armatures I had also chanced upon, what I hoped would be, suitable Bamboo stands.  On closer inspection there were three different heights and the plastic was a little flimsy and of course a wonderfully lurid green.  As a result nothing had happened with them, until now! 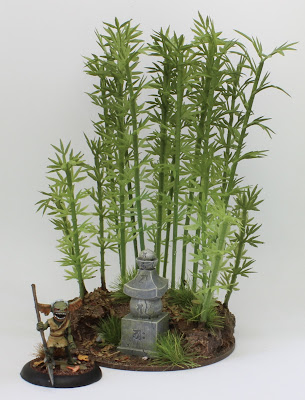 I had in mind to create a Bamboo screen to block line of sight and so started with some off cuts of blue foam to raise the height just that little bit more.  I also had one more piece of 3D printed scenery from my splurge on the ‘Master Crafted Miniatures’ site and so this base was going to be the perfect spot for my Gorintō.  Slowly, but surely the screen was taking shape and with the final addition of the Bamboo stalks, although I did have to pre-drill the holes as the plastic was so feeble, the basic construction was finished. 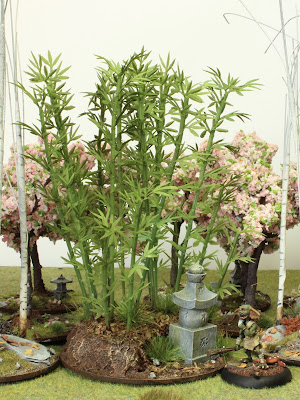 Painting followed a fairly predictable palette, particularly with the groundwork.  The lurid green shoots were simply give a blast with an Olive Green Tamiya aerosol I had lying around, which seemed to the trick and with a smattering of leaf litter and a couple of larger green tufts the build was complete. 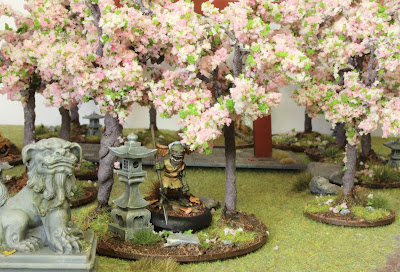 So two additional terrain pieces that I wasn’t planning on building, but ultimately really pleased with their outcome.  Both pieces have already been used and the bamboo screen works particularly well, I just need to watch out for those pesky Tengu Descension and their ‘Fly’ trait!
Posted by Michael Awdry at 08:30